Residents of La Parfaite Harmonie can now feel a sense of security, with the expected opening of a police station in the community that is home to over twenty thousand persons. This was disclosed by Deputy Commissioner of Police, Nigel Hoppie during a community engagement with the residents.

The police station is to be commissioned within a month; the news was welcomed by residents since the community is already experiencing a 27% decrease in crime.

A resident, Saleem Khan, said “A police station in a month is very good. At least from this gathering, the residents of La Parfaite Harmonie have an idea of what is the plan, through the Commissioner of Police and the Region 3 ‘D’ Division what to expect coming down the road. So, it is very good that they are opening the police station in the area.”

Maxine Fredericks also welcomed the news which she believes will help with further reducing criminal activities in the area along with the help of the community. “The opening of the police station, we need that, collaborating with the community and stakeholders within the community like the business community, that is very important,” Fredericks said.

Karl Taylor, Chairman of the La Parfaite Harmonie Community Policing Group believes the opening of the station is a step in the right direction. Taylor indicated that the CPGs will be “working with the police at the station and we will be making sure that crimes keep to a minimum.”

Deputy Commissioner Hoppie said the station will be fully manned by more than 30 officers. “There will 29 ranks headed by an inspector, one sergeant, six corporals and 11 constables. We already have the sub-divisional officers who are here and his number is one that would have to be given to you so that he can be contacted,” he told the residents.

It was also highlighted that when the station is established, youth groups will be formed that will work directly with the officers. The Deputy Commissioner also called on residents to play their role in keeping the community safer by partnering with the officers.

While there is already a CPG within the community, more residents are being urged to join the group.

Prime Minister, Hon. Moses Nagamootoo and Director-General of the Ministry of the Presidency, Joseph Harmon committed to donating 12 bicycles to assist the CPGs with patrols. Additionally, Komal Singh, a public-spirited citizen has pledged to donate a motorcycle to the station when it is commissioned.

The police station set to be commissioned in La Parfaite Harmonie. 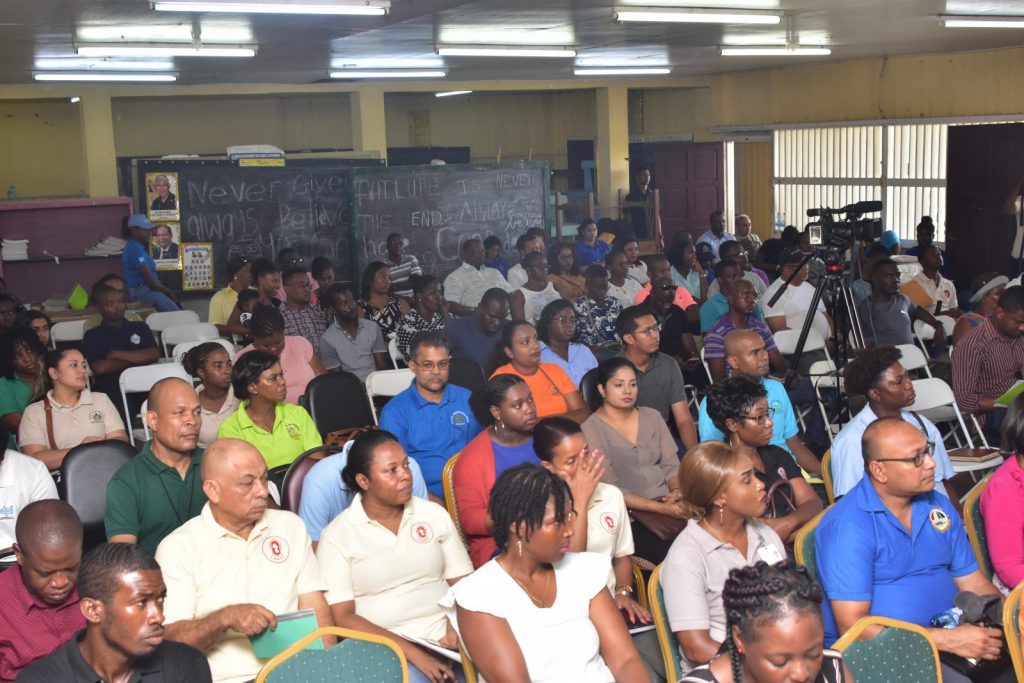 A section of the audience at the government engagement in La Parfaite Harmonie.