―As country celebrates 50 years as a Republic

Messages of unity and cooperation, along with calls to keep Guyana on its current trajectory were brought by government and regional officials to Linden residents at the Flag Raising Ceremony to observe Guyana 50th Republic anniversary.

Hundreds of Lindeners flocked the Christianburg Community Centre, the same venue, the first flag-raising ceremony was held when Guyana gained its republic status in 1970.

Region Ten Officials standing to attention as the Golden Arrow Head was hoisted. 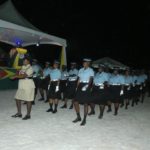 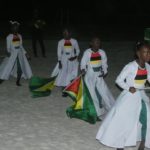 A cultural dance by the epic dance group. 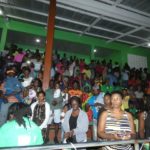 A section of the audience at the Region Ten flag raising ceremony.

Delivering the keynote address, Minister within the Ministry of Agriculture, Hon. Valarie Adams-Yearwood noted, “These are exciting times, with much to celebrate…let us do it together and transform this beautiful nation.”

“Today we can look back and be proud of our country, internationally, we are recognised and I say let the progress continue,” the minister said to loud cheers.

“Political Independence is not an end in itself, but rather it represents an opportunity to create a society, which all citizens are assured of social and economic justice,” Figueira posited.

The process of change, he said, is continuous and it requires a determined effort by all Guyanese to be realised. “So, let us move forward together in a continued effort to transform this country we call home,” he charged the Lindeners

Former Member of Parliament Audwin Rutherford urged to support the decade of progress that has already begun. “As we celebrate, we must be prepared to transform, I encourage us to embrace that transformation, be a part of that transformation and this country will definitely move from potential to possibilities,” he said.

Similar messages of reflection and encouragement were made by Mayor of Linden Her Worship Waneka Arrindell and Regional Chairman Renis Morian.

There was a culture display of national pride through song, dance, poetry and steel pan music.

Bringing the curtains down, was the highly anticipated military parade which saw members of the disciplined forces, the constabulary ranks, scouts, firemen and the children’s militia showing off their poise and marching in unison.

The regional officials inspected the Guard of Honour before the Golden Arrow Head was hoisted at midnight.