Members of the Caribbean Community (CARICOM) can enjoy favourable economic advantages similar to Trinidad and Tobago only if ” regimes of fairness and working institutions” are established.

Prime Minister of the twin-island republic, Kieth Rowley in refuting claims that Trinidad is considered to have a comparative advantage over other CARICOM member states said,

” We do have some comparative advantage, but that does not mean others cannot access those kinds of advantage themselves.”

Rowley made these comments to the media after coming out of a bilateral meeting with Suriname, today.

Trade between the two countries were up for discussion during the meeting.

Rowley and other CARICOM leaders are in Guyana for the 37th Regular Heads of Government Conference which concludes this evening.

Rowley said he does not accept the label of Trinidad as the “super power” country of the regional block. Rather, Rowley said it was the hard work and “sacrifice” of businesses in his country that have allowed Trinidad to “put itself in a position to be able to manufacture and to trade” as successfully as it has.

Rowley added that member states must “see the CARICOM region as the market of each other then business can grow within the larger market, and we simply can put the accepted institutions in place so that we can expand our business and trade freely among each other.”

The CARICOM Single Market and Economy (CSME), was an agenda item that member states discussed during the conference. 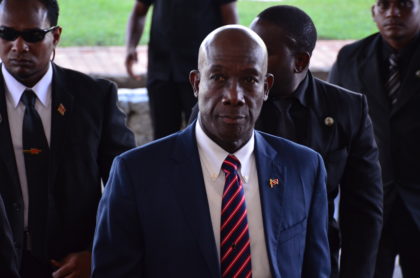