―Committed to increased pensions in the future

Minister of Finance Hon Winston Jordan commissioned a benab for the Berbice Pensioners Association in New Amsterdam on Friday.

Noting that the benab was built by the Ministry of Finance, for their comfort and relaxation of the pensioners, Minister Jordan said it is not only the grand gestures but little acts such as these that make the difference in the lives of ordinary citizens. 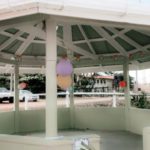 The Benab commissioned by the Minister of Finance Winston Jordan for the Berbice Pensioners Association. 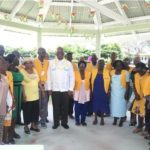 Minister of Finance Winston Jordon shares a moment with members of the Berbice Pensioners Association. 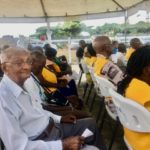 A section of the gathering at the commissioning ceremony.

The Minister remarked that through the various outreaches the government was able to meet one-on-one with residents in various communities, listen to their concerns and answer their calls much like the request for a benab was answered for the pensioners association. According to Minister Jordan what really matters to the citizens is the knowledge that their “government is a caring one that listens and acts in the interest of the people because the good life is not just a mantra.”

“If someone grew up in poverty, struggling to get things to eat and today they have a salary of $70,000 instead of thirty-something thousand four years ago, that is evidence that they are moving towards a better life. If they were getting water by walking two miles to a standpipe and today, they have water in their yard and their homes, that is evidence of progress towards the good life,

He also alluded to that fact that presently under this administration pensioners are receiving a monthly pension of $20,500, as compared to a mere $7,500 four and a half years ago, He told those gathered that the government will continue to ensure that figure increases.

The minister called on the pensioners not be content to think that their days are numbered after retiring.  He opined that the youths have much to learn from the elders who have given a lot to the development of the country.

Minister Jordan also committed to addressing some issues that were highlighted regarding tiling of the floors and seating accommodation.

President of the Association Burchell Archer on behalf of the pensioners thanked the Minister and other donors noting that the structure will go a long way in making the lives of the elderly comfortable when they gather together.