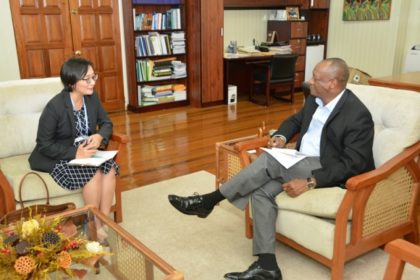 During the meeting, mutual areas of interest, including Guyana’s green agenda and climate change, the country’s on-going territorial controversy with neighbouring Venezuela and Guyana’s push for a juridical settlement, Government’s infrastructural development plans, crime and security and education, among others, were discussed.

Minister Harmon told the new representative that the Government appreciates the strong and active relationship, which has existed between the United Nations’ Guyana offices and the country over the past years. 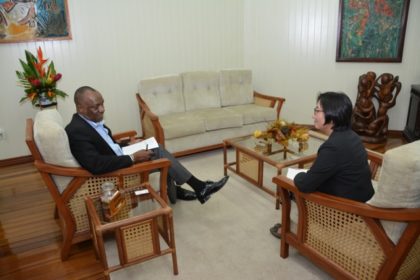 Minister Harmon makes a point to Ms. Tanaka ,during their meeting this afternoon at the Ministry of the Presidency.

“We do look forward to your continued cooperation during your stay here in Guyana. We have an open door policy here at the Ministry and we trust that you would have an excellent tour of duty,” Minister Harmon said.

Meanwhile, Ms. Tanaka said that the hospitality, which has been extended to her in Guyana is commendable and she is most confident that her stay here will be fruitful.  “I am very happy to have this opportunity to serve Guyana. Of course, I have a lot of learning to do but I hope to use my experience from other countries that I have worked in to serve,” she said.

She further noted that she is pleased with President David Granger’s push for the development of a green economy and will lend whatever support is necessary to assist in that process.