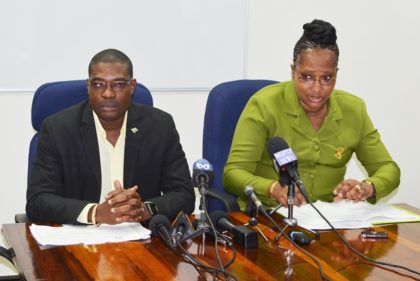 The Minister revealed that Cabinet has given its approval for the Public Service Ministry to create positions for engineers with a salary that is justifiable. Minister Patterson explained that even though more engineers are needed to service the regions, (particularly the hinterland regions), the current remuneration packages available are not attractive enough.

Further, Minister Patterson, speaking about contracts for government projects noted that though some contractors who have been awarded contracts lack the capacity to execute jobs, they nonetheless continue to bid for other works. Minister Patterson indicated that this has resulted in contractors “spreading themselves thin” and missing key checkpoints. However, Patterson added, their contracts cannot be terminated prematurely. The issue will be addressed and plans are underway to meet with contractors and the private sector, the Minister said.

In relation to capital works under the Ministry, the Public Infrastructure  Minister explained that at the end of August 2016, a total of $11B was expended, which represents 45 percent of the Public Sector Investment Programme.

The budgeted $1.2M for the foreign-funded East Bank Berbice project is awaiting ‘no objections’ from relevant agencies. “We would have done our part, and I am hopeful once again that early next month I would have a payment,” the Minster explained.

Additionally, the Minister highlighted that the continuation of the East Coast highway has not commenced, but efforts are underway to do so soon.

“I have been seeing a lot of public discourse on the state of the government’s spending, but I want to assure you that we are working assiduously to do our best,” the Minister said.

The Minister also gave an update on the Cheddi Jagan International Airport (CJIA) expansion project. A roundabout at the country’s main airport will help to reduce traffic congestion, the minister stated.

“We have strangely two lanes merging into one then making a sharp right turn at the head of the airport junction and all that area is under the Ministry’s control and we’re doing a large, sizeable roundabout to connect the roads,” the Minister said.

The US$150M CJIA expansion project is a design-build model and is being constructed by China Harbour Engineering Company Limited.

Meanwhile, the final submission of the report on the Eugene F. Correia International Airport has not yet been made. The review focused primarily on the lease agreement of the facility. Thus far, the draft review has pointed out the need for the appraisal of the facility’s committee. Stakeholders will be engaged by the Ministry of Public Infrastructure upon the submission of the final evaluation.

Minister Patterson stressed that the report will not be a “blame document” but will instead seek out recommendations on the best way forward.

Minister Patterson revealed that he and a team met with the Ministry of Finance’s officials to discuss the Infrastructure Ministry’s proposed budget for 2017. Some focus areas highlighted by MPI include the improvement in service to hinterland areas and the development of urban communities.

The Minister pointed out that the Ministry will be making its final submissions for the 2017 budget on September 16, 2016