―second visit by the cruise ship to Guyana’s shores

Today the MV Serenissima docked in port Georgetown for the second time since 2016. On board were seventy-seven passengers and fifty-seven crew members.

The cruise ship will be here for three days giving visitors the opportunity to visit tourist hot spots like Kaieteur Falls, Baganara Island Resort and the capital city Georgetown.

The visitors were welcomed this morning with the sounds of steel pan music, local art and craft and the beverages from Banks DIH.

The Department of Public Information spoke with some of the visitors and heard of their excitement to be here.

First up was Richard Chambers: “We’ve travelled down the Lesser Antilles from north to south starting in Antigua then we stopped at Tobago and Trinidad then we’ve had probably about 48 hours on the sea which we were not ready for to get down to Guyana, and this is the highlight as far as I’m concerned…to see Kaieteur Falls.”

Chambers said his fascination with the Caribbean and Guyana began 58 years ago when he participated in a Scout Jamboree in Trinidad; there met scouts from across the Caribbean including Guyana. Today he remarked he is finally living the dream of visiting Guyana.

Another tourist Steven Lockwood, when asked what he expects from his visit to Guyana, replied: “To meet nice people, enjoy wonderful weather, and observe interesting scenery.” “First time to Guyana and it was the fact that this ship was coming to Guyana that was part of the appeal” he added. 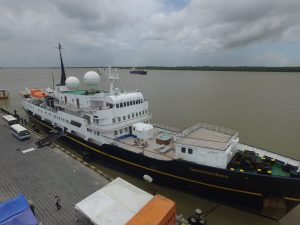 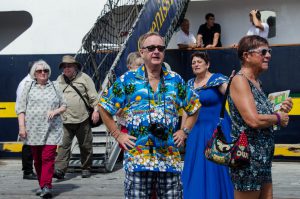 Some of the visiting tourists 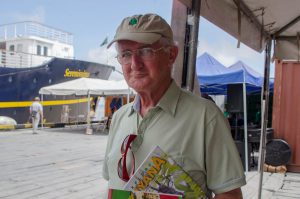 Richard Chambers is fulfilling his 58-year dream of visiting Guyana 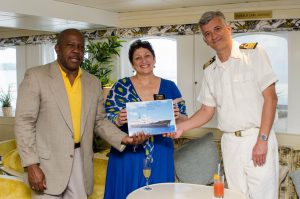 (from left) Director General of the Department of Tourism Donald Sinclair, General Manager of Wilderness and Captain of the Serenissima Erik Juranovic

Sir De Vic Carey another shipmate also expressed his delight to be here.

“There are great expectations of coming to Guyana, it’s supposed to be the highlight of our cruise and it’s so wonderful to come somewhere where you do not have many cruise ships and I feel for you. I come from a small island in the English channel and we have lots of cruise ships and we are very pleased to see visitors cruising and I hope that many more ships will come to Guyana, we look forward to going to the falls onto the river and also seeing the town of Georgetown,” he said.

The MS Serenissima previously docked in Guyana in April 2016 and discussions began about having another, longer visit since it was only here for one day.

Cruise Director, Neil Horrocks remarked  “We’re very, very pleased to be back and have such a wonderful welcome some ports you go to and its almost a bit like we’re an inconvenience, but here it’s the opposite way around, and it’s very exciting, the passengers came up this morning and said you can feel the vibe coming from the shore side already”

Director General of the Department of Tourism Donald Sinclair was part of the welcoming party for the visitors and while speaking to the media Sinclair explained that a special task force was established to ensure that the tourists’ visit here was well organized and executed. This task force is comprised of officials from several agencies including the Guyana Revenue Authority, Port Health, Tour Operators the Police Force and the Civil Defence Commission.

Sinclair also noted that a Standing Operating Procedure (SOP) will be developed to ensure that all necessary criteria are met especially with the new prospects in local tourism.

“The operators are in touch with the perspective cruise operators to ensure that there is a steady flow and now that Guyana has won the award for the best eco-tourism destination in the world there will be more curiosity about Guyana,” the Director General said

The tourists, mainly from the United Kingdom will dock in Suriname after visiting Guyana, before departing by air for home.