The government is putting measures in place to ensure that its use of funds, whether from multilateral agencies or oil and gas, is utilised in a fair and transparent manner.

A new framework document is being prepared with assistance from the Caribbean Development Bank (CDB) and other donors, for public-private partnerships. This document will be laid before the National Assembly on April 26. 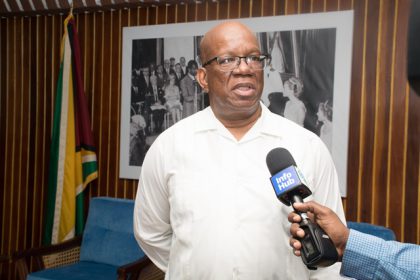 According to Minister of Finance, Winston Jordan, the administration will begin applying these actions to the US $900M funding envelope provided by the Islamic Development Bank (IDB). This is the largest loan ever provided by a multilateral lending agency to Guyana. The minister sought to put this into perspective during a recent media brief.

The Finance Minister added that even with the resource envelope of US$20M provided by OPEC Fund for International Development (OFID) added to the aforementioned, the funds are not sufficient to build the new Demerara Harbour Bridge, for example.

Guyana’s needs, Minister Jordan explained, far exceed what multilateral agencies can offer presently, “While we are thankful for the assistance we are getting from multi-lateral banks, it’s not going to fetch us or even bring us into the 20th century even though we are already into it. We have to find any number of ways of financing our development, any number of ways and we need huge sums of money.”

The minister reminded that the prior experiences with these arrangements have not been positive, citing the Marriot Hotel and the Berbice River Bridge deals as examples. He explained that the document will guide any such proposed partnerships in the future. Another way, Minister Jordan noted was to utilise funds from the expected windfall from oil and gas revenues.

The minister noted that the expected earnings will far exceed what the country’s coffers has previously experienced. He urged the media to see the positives for the nation’s development, despite the criticisms about the deal between Guyana and ExxonMobil.

Minister Jordan said, “In parallel, you could perhaps run articles about how you see the future of Guyana using these resources. That debate can continue or be accelerated in the context of the Green State Development Strategy. Trying to put in place resilient infrastructure, trying to bridge to gaps between the coast and the hinterland. Trying to create new towns and spaces for a growing population, and that will require money.”