No plan to replace mining in Guyana – Min. Trotman

The Government will not replace, nor will it neglect the country’s mining sector. This assurance from the Honourable Raphael Trotman, Minister of Natural Resources.

Delivering remarks at the opening of a two-day National Inception Workshop and Training on the Development of a National Action Plan for Artisanal and Small-Scale Gold Mining in Guyana, Minister Trotman stated that for as many years gone by, Guyana’s Artisanal Small and Medium-Scale Gold Mining Sector had aided in the country’s development in a significant way and continues to do so.

Thus, indicating that the government has no intention of replacing mining in Guyana.”

“In Guyana, the Artisanal Small and Medium-Scale Gold Mining Sector is significant to the national economy. The ASGM sector accounted for 6.1 percent of Guyana’s GDP last year,” Minister Trotman revealed.

According to the Natural Resources Minister, in 2019, the Government also generated 33 percent of the foreign exchange earned from gold production. It was also the main source of employment and revenue for hinterland communities including Indigenous ones.“(The ASGM Sector) provides direct employment for over eighteen (18) thousand persons and indirectly thirty (30) thousand persons,” he revealed.

However, with that being said, the sector also uses Mercury in the process of gold production and this needed to be curbed Minister Trotman noted. 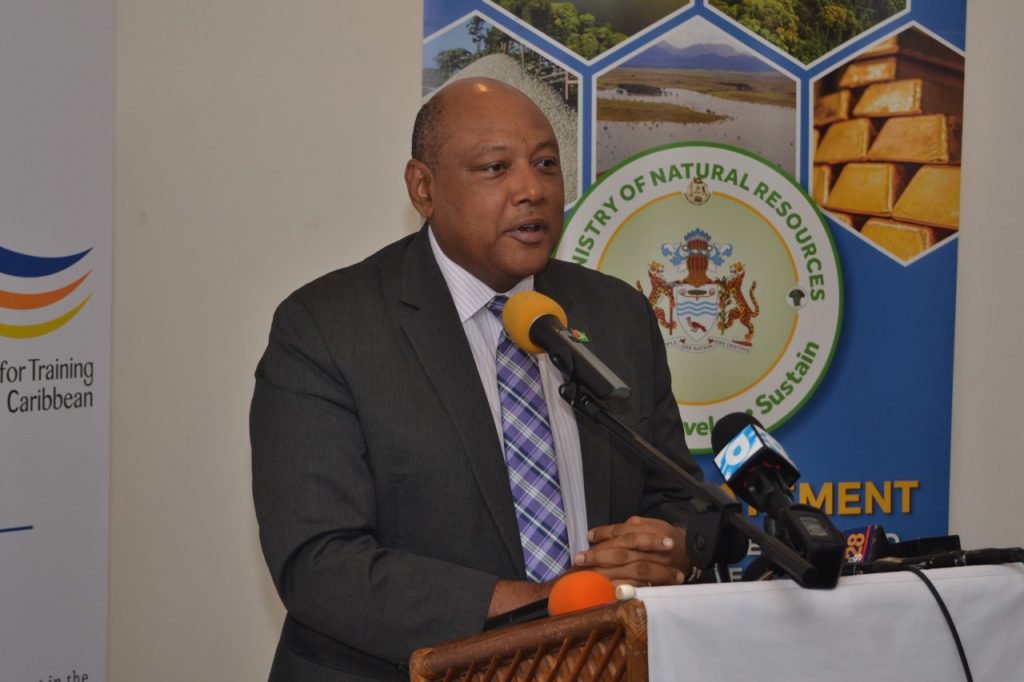 “Mercury, its use and effect has become a buzz topic and is high on the national agenda of the Government of Guyana. We can therefore neither postpone nor avoid this discussion and the action that must be taken.” Min. Trotman declared.

Adding that “the Government of Guyana remains committed to implementing practical, effective and efficient measures for the reduction and elimination, where feasible of the use of mercury in the ASGM sector and materialization of His Excellency’s 2027 vision and commitment.”

Minister Trotman said as his ministry promotes responsible mining initiative and the country’s green living strategy, it has adhered to the August 2019 deadline of signing a Memorandum of Understanding (MOU), for the management of the importation of mercury into Guyana, now further steps must be taken to curb and eventually stop the use of Mercury in Guyana.

This he says must be done with as little effect as possible to mining operations.

The Minamata Convention on Mercury is an international treaty designed to protect human health and the environment from anthropogenic emissions and releases of mercury and mercury compounds.

Following Tuesday’s workshop, which outlined the National Action Plan to stakeholders, the team will travel across the country educating Guyanese; miners and Indigenous communities on the Minamata Convention on Mercury, and on Guyana’s own plan to stop the use of Mercury.

Editor’s Note: Mercury, commonly known as quicksilver is a chemical element with the symbol Hg and atomic number 80. Large amounts ingested may cause bloody diarrhea while absorbed mercury can spread to the organ system resulting in mental changes including mood swings and memory loss or renal damage. It has toxic effects on the nervous, digestive and immune systems, on the lungs, kidneys, skin and eyes.