Ayasia May LaFleur is the proud owner of a new, semi-furnished home at the New Prospect Housing Scheme. The soon-to-be former-resident of GuyHoc Park Squatting Area and mother of nine was squatting since the age of 23. She explained that she applied 12 years ago for a house lot, and hoped that her fortune would change under the Coalition Government since she got “nowhere” under the previous administration.

LaFleur decided to visit the Central Housing and Planning Authority’s (CH&PA) Open House Exhibition on Sunday, March 31. Like hundreds of others, she filled out a coupon for a chance to win a free house courtesy of the CH&PA. The 41-year-old was in the Gift Land Mall shopping when she got the call.

An ecstatic Ayasia May LaFleur.

An elated Ayasia May LaFleur holds up the winning lottery ticket while Minister within the Ministry of Communities with responsibility for Housing, Valarie Adams Yearwood and staffers look on.

“I was so happy. I screamed out in the Mall. Everybody around me wanted to know what happened but my friend who was with me said, ‘Ok take it easy. Let’s go and hear what they have to say,” she recalled.

When she arrived at CH&PA, she affirmed her good fortune. Asked about her present circumstances, La Fleur said she was squatting, “on a government reserve and really wanted to move for a long time.”

Minister within the Ministry of Communities, with responsibility for Housing, Valarie Adams-Yearwood said she had fervently hoped that the house would be won be by someone, “who really, really, really needed it.” According to the minister, the house is valued at $4M and the plot of land is $100,000. The lucky LaFleur only has to pay $100,000 for the land, within the next six months.

The new homeowner will receive her the keys to her home Friday, April 5. It will be equipped with a microwave, bed, television and maybe a few other amenities, the minister added.

According to the CH&PA, more than 50 per cent of Guyanese are applying for house lots within the low-income bracket and providing for those applicants, the agency is collaborating with several private developers to make that possible.

The homes that were on show at the recently held Open House exhibition at Prospect, EBD range in price starting at $4M, $6M and $9M. The exhibition which commenced on Friday and ended Sunday, March 31.

The CH&PA has stated that will move beyond single units and duplexes and add condominiums to the housing developments. 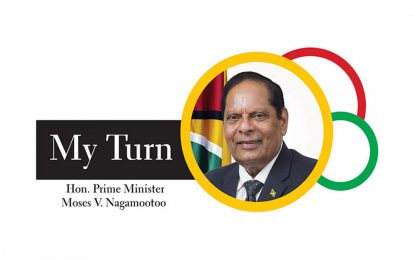 Author Details Staff Writer Author Department of Public Information email communications@dpi.gov.gy follow me July 12, 2020 – From my exposure to elementary Latin in high school, I remember the fable from Greek mythology about Minotaur. That was a fictional monster with the head of a bull and... END_OF_DOCUMENT_TOKEN_TO_BE_REPLACED