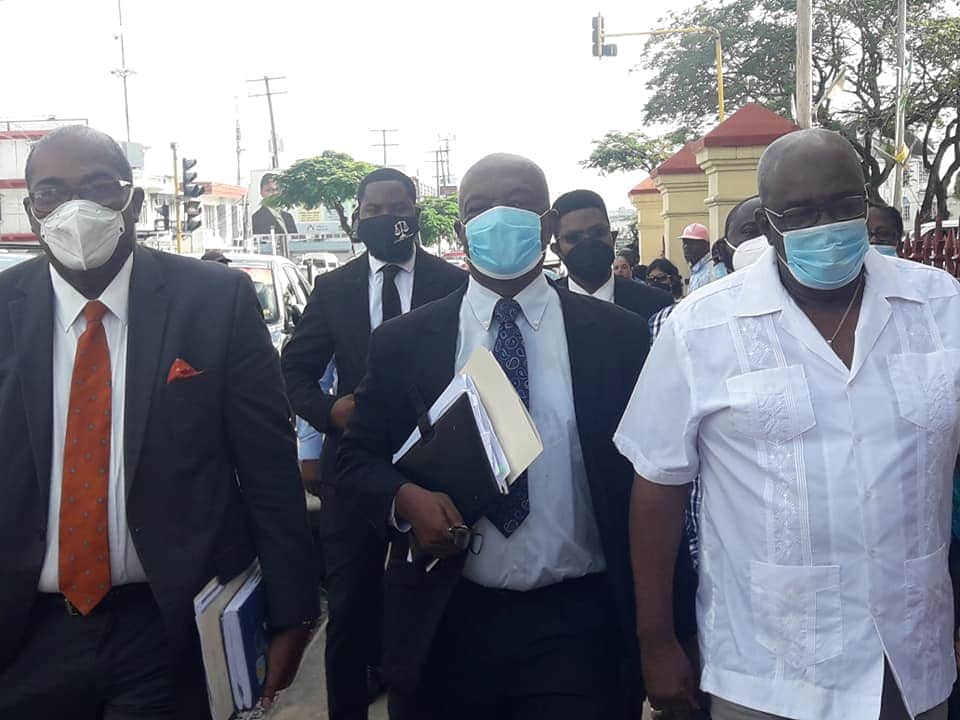 Lawyers prosecuting the charges brought against the Chief Elections Officer (CEO) of the Guyana Elections Commission (GECOM) Keith Lowenfield were said to be ill-prepared for the matter Friday when they also attempted to transform the court of law into a political circus.

The CEO appeared in the Georgetown Magistrates Court ready to answer to three private charges filed by the political opposition, but instead, his lawyers said Magistrate Faith McGusty was given a political speech.

Led by Senior Counsel Neil Boston, Attorney Nigel Hughes appeared for the CEO, who is facing, among other charges, misconduct in public office.

Hughes told reporters outside the court that the prosecution team led by attorney Glen Hanoman was unprepared for the matter.

“One of the concerns that we have and we repeatedly expressed to the court, is the fact that we did not want the court to become a forum for a political battle. There were sufficiently senior lawyers who were present to keep this within the confines of the law. But they continued to persist with the political statements they were making,” Hughes related.

The charges against the CEO were filed by both the PPP and The New Movement (TNM) parties, alleging fraud and misconduct in the submission of the CEO’s June 23 elections report.

The CEO was granted bail of $450,000 – $150,000 for each of the three charges. While Hanoman had no objections to bail, Hughes said he proceeded to make a series of “what I will consider to be political statements”

Following the granting of bail, Hanoman told the magistrate that he had in is possession some 800 statements obtained from witnesses. Hughes said his team raised objections to that since they thought that if the prosecution had time to bring the charges then it would be ready to start.

Hanoman asked for a one-month adjournment, however, the magistrate said the court will meet again in two weeks time on August 14.

“It is evident to us at this point in time that they are not ready. If they had concerns, those concerns should have been lodged with the police force and any appropriate law enforcement agency. Our real concern is they are attempting to take this and turn the court of law into a political circus. We will continue to abide by the law. We will return in August and continue our defence of Mr Lowenfield,” Hughes stated.

He relayed that Hanoman raised objection to Senior Counsel Boston leading the defence and expressed the intent to call Boston as a witness. This was after Hanoman had a very casual discussion with Hughes and Boston where he indicated that he wanted to call him as a witness Hughes said.

“Naturally we had very strenuous objections to this because normally a lawyer will have statements from witnesses long in advance and will at least have the courtesy of contacting them beforehand. Therefore, I think the ploy has been exposed for what it was. He was attempting to get Mr Boston off the case.”

SC Boston said the charges brought against his client are of nuisance value, noting that Hanoman was making a “political speech” since there is no substance to the charges.