Outgoing Chinese Ambassador, H.E. Zhang Limin, today paid a courtesy call to Agriculture Minister, Noel Holder at his Regent Street office. During their dialogue, Ambassador Limin pledged China’s continued support to the development of the agriculture sector and by extension the country. 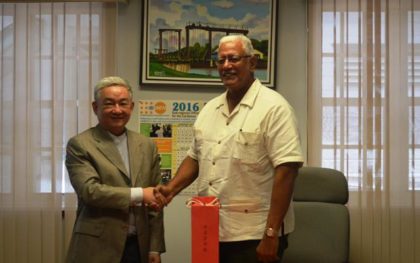 One of key areas discussed was ways in which China can further collaborate with Guyana to develop the agriculture industry. Ambassador Limin indicated that, in the future, China hopes to collaborate with Guyana in further developing the rice industry specifically focusing on trial exercises for new varieties and implementing new technologies for cultivation. “I think that, in the future, we can cooperate in the rice industry with developing some testing fields. We can use these fields to try out new technologies on rice.” Ambassador Limin said.

Agriculture Minister, Noel Holder thanked the ambassador for China’s continued support towards the innovative development of the sector. Minister Holder called for more collaborations in the future and more insight into the Chinese’s agricultural practices.

“I know China has been cooperating with Guyana in a number of areas but, at present, we have not really been exposed to your agriculture. We have not really had the chance to take your experts to our interior regions to see where we can get your full assistance based on their expertise. Perhaps in the future, we can collaborate along those lines.” Minister Holder said.

Ambassador Limin also commended the Minister for his efforts to meet rice and sugar production targets despite the harsh El Nino conditions Guyana faced in the early parts of the year. “I know that Guyana suffered from harsh El Nino conditions this year but I wish to commend you on the production numbers you have achieved thus far.” Ambassador Limin said.

The Chinese ambassador is expected to return to China at the end of the month.

Over the years, Guyana and China shared fruitful bilateral relations which resulted in the implementations of successful projects in the health, education and agricultural sectors.