(Georgetown, Thursday, February 20, 2020)- Convenient access to potable water has become a reality for some 1,200 residents of the village of Paramakatoi in Region 8 (Potaro-Siparuni) with the completion of a new water supply system at a cost of approximately GYD $65M.

In the village, located in the North Pakaraimas Mountain, approximately 1 hour and 10 minutes by flight from the Ogle airport, the new water supply system was commissioned on Wednesday, 19th February, 2020 by First Lady, Mrs. Sandra Granger.

Giving the feature address at the commissioning ceremony, Mrs. Granger said this project is a representation of government’s vested interest in the residents of Paramakatoi. 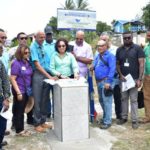 First lady mrs. Sandra Granger unveiling the plaque in the presence of Minister Bulkan, Dr. Van West-Charles and other officials. 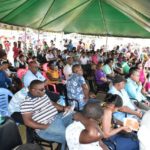 A section of the audience at the commissioning ceremony.

She acknowledged that the Paramakatoi system is one of GWI’s most complex systems, since it consists a reservoir, two photovoltaic systems, a treatment system and a transmission and distribution network from the mountains to the village.

Meanwhile, Minister of Communities, Hon. Ronald Bulkan noted that over the years of visiting Paramakatoi, one of their main difficulties was proper access to pure water. The realization of this water supply system however, will ensure that this is no longer a challenge, thanks to a caring administration.

He described this accomplishment as one that contributes to the transformation of the lives of residents.  “Lack of water access is now a thing of the past and you now have access to water all year round…We will continue to deliver on more promises after March 2.”

Managing Director of GWI, Dr. Richard Van West-Charles noted that even as we approach the country’s 50th Republic Anniversary, this project manifests the meaning of a Co-operative Republic since it is the result of a collaborative effort.

The company, he noted, has taken heed to President David Granger’s mandate of addressing inequities between the hinterland and the coastland. Since assuming office in 2015, the present government has been able to drill 48 wells, 25 of which were drilled in the Hinterland.

Dr. Van West-Charles explained that following signing of an agreement in 2017 for the construction of the system, GWI’s engineers were able to work along with the Village Council and residents to make it a reality. He thanked them for their commitment, noting that plans are also afoot to establish a GWI office in Paramakatoi in the near future.

He noted that as Guyana marks its 50th Republic Anniversary, “We want to ensure that we continue to move at a pace to ensure we can all enjoy the good life.” This therefore means potable water access to all residents’ homes and not just schools and health facilities.

He thanked the residents, Toshao and Councillors for the support and collaboration in the execution of the project.

GWI is well underway to achieving Sustainable development goal number 6, which speaks to water for all by 2030. The company remains confident that it will achieve that goal in Guyana five years earlier, by 2025.