More than forty youths, mainly from Regions Three, Four and Six, between the ages of two and 24, who have been diagnosed with type one diabetes are participating in a three day ‘Diabetic Youth Camp’.

The camp which began on Wednesday, August 23 will conclude on Friday, August 25, is being hosted at the Splashmins ECO Adventure and Camping Park on the Linden/Soesdyke Highway.

Some of the participants of the Diabetic Youth Camp 2017 pose with one of their many gifts. Also in photo are representatives of Ministry of Public Health and Food for the Poor Guyana Incorporated.

The Chief Medical Officer (CMO), Ministry of Public Health (MOPH), Dr. Shamdeo Persaud who is also the temporary chairperson of the National Commission for the Prevention and Control of Non-Communicable Diseases in Guyana addressed the youths ahead of their scheduled activities.

The CMO was accompanied by commissioners of this commission, who spent some time interacting with the children. The CMO said his mantra remains the same as he continues to promote a healthy lifestyle among the youth.

“We’re looking forward to you doing better as you go through these three days at the camp and also to continue that. So, set yourself some goals for the next three days and then continue to work on those goals when you leave here on Friday. When you go back home behave like you’re still at the camp, run about and do your exercise.” Dr. Persaud explained.

According to Dr. Kavita Singh, Head of the Chronic Diseases Unit, MOPH, the youth camp actually began in 2005 but was postponed until 2009, when the ministry entered into a Memorandum of Understanding (MoU) with the ‘Sponsor the Child Initiative.’

Through the ‘Sponsor the Child Initiative’ conducted every year, diabetic youths are observed by requisite specialists for updates on their conditions. Also, they receive critical medical supplies including testing strips, glucometer and dispensing pens.

Other donor agencies such as Food For The Poor Guyana (FFTP) Incorporated have pledged their support to the camp. 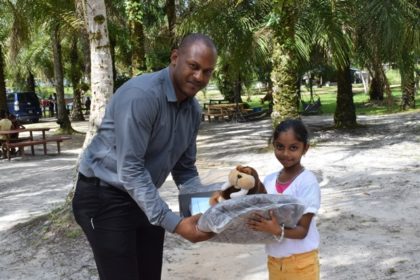 Jimeel Davis, Senior Manager, Food for The Poor Guyana Incorporated handing over camping supplies to one of the campers.

Senior Manager of the FFTP, Jimeel Davis noted that “we’ve done a lot and this to us, it’s very precious to our hearts today to give support to the kids and the families as well. You know we have gone to a lot of places and done a lot of things but when it comes to health, we play a very important role its very serious to us.”

Items contributed to the camp by the FFTP include teddy bears, books, medication and other basic supplies such as blankets to enhance the camping experience .

The youths were eager to participate in the activities, Sadeiann Johnson, who just completed secondary school explained that living with diabetes sets her apart from her friends and students her age.

“As a teenager with diabetes it’s very challenging because you may go out with some friends and teenagers they like to eat their pizza and their chicken and you cannot eat so much like them,” Sadeiann explained. However, she said that during this camp she is hoping to learn much and have fun.

Twelve-year-old, Ravindra Ramdhan bravely pointed out that he looks forward to coming to the camp to learn and meet people especially new comers. “I would also like to say thanks to all the (sponsors) of this camp. We are looking forward to better improvement, we are enjoying ourselves, we expect this every year.”