The Ministry of Agriculture Rural Affairs Secretariat brought down the curtains on its Kitchen Garden competition with the announcement of the winners on Friday.

Seventy gardens were judged and the overall winners are in first place Frank Moore from Region 10 while Mabuba Muhammad from Region six was given second and Panchan Singh from Region Nine third. 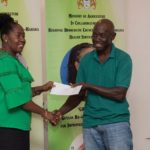 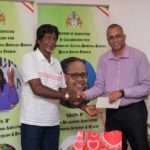 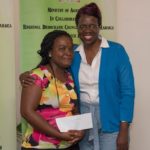 Region 6, second prize winner, Mabuba Muhammad after receiving her prize from Permanent Secretary of the Ministry of Agriculture, Delma Nedd.

Minister within the Ministry of Agriculture, with responsibility for Rural Affairs, the Hon. Valerie Adams- Yearwood noted that the competition was well received.

“We were able to run the competition to Region Four, more specifically, the East Coast and East Bank of Demerara, in Region Five from Fort Wellington to Bush Lot, Region Six, from Number 53 Union to Kildonan, Region Nine, from Lethem to St. Ignatius and in Region ten. I must say the competition received an overwhelming response.”

The competition formed part of the ministry’s activities to observe celebrate Guyana’s 50th Republic Anniversary and to stimulate interest in agriculture with a focus on households being able to contribute to their food needs.

It was also disclosed that 34 model kitchen gardens were established in health facilities across the Demerara-Mahaica region. These were part of the Guyana Re- aligning Agriculture for Improved Nutrition and Health (GRAIN-H) initiative which was launched in September 2019.

It encourages persons who attend non- communicable disease, parental and geriatric clinics to participate in a study to assess the relationship between the consumption of organic foods and appropriate portion size, reducing health risks in conditions, such as high blood pressure and diabetes

Regional Health Officer for Region 4, Dr. Quincy Jones explained that “Both health workers and patients had the opportunity to strengthen their knowledge on how to grow healthy foods in their own backyards.”

“The projects started change through communication for a development type model, where over these model gardens, patient and health workers not only had a chance to exchange knowledge but to initiate behavioural change that would lead them to prepare more healthier meals,” Dr. Jones added

The health centres were also mandated to keep records of the participating patients and at the end of the pilot, report any changes in their health conditions.

The Ministry will roll out the second Kitchen Garden Competition in May 2020 in all ten administrative regions.