As nomination day kicked into full swing on Friday, His Excellency President David Granger joined the APNU+AFC parade on Main and Lamaha Streets as they made their way to the Umana Yana.

The presidential candidate was in high spirits as he was swarmed by enthusiastic supporters chanting “Granger! Granger!”

His Excellency President David Granger and Prime Ministerial candidate and Minister of Public Security Khemraj Ramjattan surrounded by a sea of supporters. 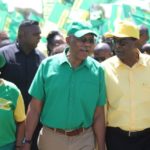 Hundreds of loyal supporters assembled at the parade Ground and braved the heat as the danced and chanted in support of the APNU-AFC coalition.

The procession moved off from Parade Ground in their bright yellow and green shirts and flags high. They continued to demonstrate their support as they marched towards the Umana Yana waving their flags and echoing their chants.

Earlier in the day, the Department of Public Information spoke with several of the Coalition members who expressed confidence in the upcoming General and Regional Elections.