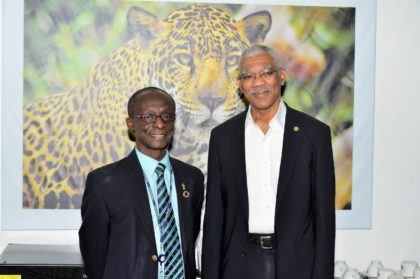 President Granger spoke of his concerns as it relates to pollutants in the rivers and waterways as a result of mining. He explained that citizens, who live in those communities, are facing numerous health risks and informed the PAHO representative that this is one area in which Guyana needs assistance in terms of monitoring and implementing best practices. He also expressed his Administration’s appreciation for the work that the organisation has been doing.

Meanwhile, Dr. Adu-Krow updated the President on the ‘Smart Hospital’ initiative that the organisation has been working on with the Ministry of Public Health. This initiative is aimed at setting up health facilities that utilise ‘green’ energy and are also equipped to withstand any man-made or natural disasters. The project is being funded by the United Kingdom’s Department for International Development (DFID) at the cost of US$5M.

Dr. Ad-Krow said that this initiative ties in with the ‘green’ development agenda that the Government of Guyana has been pushing. Thus far, 70 health institutions have been reviewed and the Government has to now select 8-10 of them to be upgraded.