Both women have been involved in charity work for a number of years, particularly assisting the less fortunate in New Amsterdam, their hometown. The latter said that they fully endorse the President’s drive to make Guyana an education nation and want to become more involved. 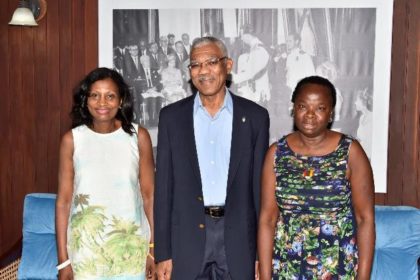 President David Granger flanked by Ms. Elsa Blackman (left) and Ms. Wannetta Phillips at the Ministry of the Presidency, this morning

They had earlier convened a meeting with BHS’s head teacher, staff and Parent Teachers Association (PTA) to discuss the needs of the 100-year old institution. This meeting resulted in a very lengthy ‘wish list’, foremost on which was a fully-functional information technology laboratory. Ms. Phillips said that she was very happy with President’s pledge of $1M to the school yesterday, to go towards this very need.

President Granger explained that, “Guyana is very far behind than other Caribbean countries in terms of information technology, so this is where we are going to put our efforts.”

He added that in a small country like Guyana where the annual school drop-out rate is 4000 students, his Government made the decision to tackle the problem at the source by ensuring that children, regardless of where they live, are able to attend school. This led to the advent of the ‘Five Bs’ programme, which to date, has received overwhelming private sector support. To date under the programme, eight boats and nine buses have been commissioned and hundreds of bicycles have been distributed to communities across the country.