Residents of the small village of Princeville are pleased with the infrastructural development in the township of Mahdia and surrounding villages in the Potaro-Siparuni Region.

Resident Noel Adams, formerly of Moruca, Region 1, has been living in Princeville for the past 31 years. As a voice in his community, he said that Princeville residents are sure to support the Coalition government. He reasoned that the residents have seen a genuine interest in developing Indigenous communities not only in Region 8 but all across the country. “I have seen a change in this time and let me give jack their jacket right there… we are seeing change coming so we have decided that we would like this government for five more years so that we can see that change that is coming… we have seen progress,” Adams said. 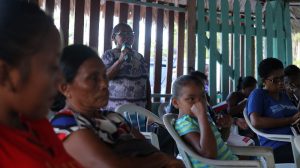 Some of the residents who gathered at the community meeting held at Princeville, Region 8

He reflected that for many years, their cries for improved infrastructure fell on deaf ears, which often led them to protest to draw attention to their needs. He added that during that time, the roads were so deplorable it would have cost at least $25,000 to hire a car to travel 12 miles to Mahdia and return to Princeville.

“Today, I would pay only $5,000, and that is to go and return from Mahdia. For 23 years, the road was all mud and sometimes a truck took three days to reach to Mahdia, there was a place called Lion Hole. Now, I see a very big difference in this sub-region. There is now a solid road; I could just jump in a vehicle and be on my way. I know that in the next five years this road can be a highway,” Adams noted.

Minister of Public Health, Hon. Volda Lawrence recently visited the village where she interacted with the residents who shared general concerns relating to the improvement of services. Residents relayed their enthusiasm to be involved in the continued development of the community.

Minster Lawrence was part of the ministerial team that travelled to Mahdia for the most recent government outreach. The exercise allowed the officials to get a firsthand look at the region’s needs, to better address the issues facing the residents.