The Maternal and Child Health Department, Ministry of Public Health will launch a project at the Soesdyke Health Centre, Region Four that will work towards eliminating maternal deaths.

The project is premised on providing home-based maternal healthcare to pregnant women who may be unable to fulfill scheduled appointments at clinics and health centres. The project will ensure that mothers who missed clinic dates will see a doctor, and benefit from up-to-date medical check-ups.

Region Four recorded three maternal deaths for 2016. Government Medical Officer for the region, Patrick Lindore explained that these were identified early as high risk cases and referred to the Georgetown Public Hospital for monitoring. 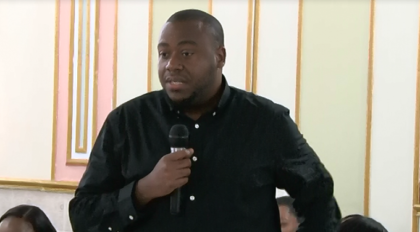 Dr. Lindore was at the time responding to questions posed by the Minister of Public Health, Volda Lawrence who expressed concern about the cases which were highlighted in the Regional Health Officer, Dr. Farrah December’s 2016 presentation on Region Four’s health services. The presentation was made at the recently concluded RHOs meeting where the minister was inquiring about the cause (s) of maternal deaths in the region.

Dr. Lindore pointed out that, “there were deficiencies when it came to the patients seeking earlier admission to clinic. I went personally to the Maternal and Child Health Department of the Ministry of Public Health, and I sat down with the senior supervisor and the RHO and found deficiencies… we realised that many of us, because of the dynamics and because people in Region Four, are working, and aren’t home and it’s difficult to get to the health centre.”

Dr. December noted that in 2016, Region Four recorded 3069 live births of which 3056 were at hospitals. Thirteen (13) births were home deliveries. This contributed to consideration of the launch of the Maternal Love project in 2017.

“When it comes to primary health care, the total number of pregnant women that were enrolled in our antenatal clinic in 2016 (was) 1540. I’m saddened to say we had three maternal deaths in our region, one from the Diamond Diagnostic Centre who joined the antenatal clinic at that facility and two (from) other facilities on the East Bank. I think this is going to put us somewhere at the 97% aisle, we don’t like that,” Dr. December said.

The home- based care that will be made available to mothers will take into consideration patients’ biological, psychological, social and other needs throughout their pregnancy.