There’s a saying that a woman’s beauty grows with the passing of the years and local calypsonian Queen Makeba is underscoring this fact in her song ‘A woman’s Almanac’.

Speaking with DPI on Sunday last, Karen Bennet also knows as Queen Makeba said her song is a reminder of the beauty of ageing gracefully. 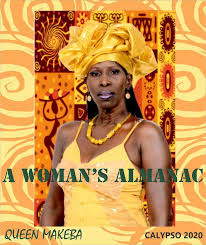 “When a woman reaches the age of 29, 20 or 31, men sometimes taunt them saying ‘you are off the almanac’ meaning they no longer have what it takes to be a calendar girl. So, I decided to remind them while we might be off the almanac at 31, we can come back at 13 – just switch the numbers so to speak. It is all a matter of how you look at ageing,” Bennet stated.

The experienced calypsonian who has been singing since she was in school says she is bringing her passion for the genre to the 2020 Calypso Monarch competition.

For the future, plans to become a songwriter to future female calypsonians. After bowing out of performing in the calypso arena.

“I would love to write songs for all of them because I love to sing and I write all of my songs…I am getting older now and I would like to pass on my knowledge. So, next year I am hoping to be able to write some lyrics for some of the young female calypsonians,” she explained.

Citing legendary singers such as Monica Chopperfield also known as Lady Guymine and the visually impaired Camille Goliah better known as Lady Tempest, Bennet said these female calypsonians served as inspirations in her journey.  She wishes to see  more women entering the arena of calypso competition.

With 18 other competitors in the line-up the Calypso Semi-Finals on February 9 in Bartica, Region Seven, is gearing up to be quite exciting.

Fans are also encouraged to go to the Department of Social Cohesion’s Guyana Republic Jubilee 2020 Facebook page to vote for their favourite artiste in the People’s Choice Award.