Red Palm Mite disease to be discussed at Coconut Festival

Coconut farmers and other interested persons would get an opportunity to learn about the Red Palm Mite disease at the coconut Festival. The Festival opens on October 21 at the Arthur Chung Convention Centre and goes until October 23. It is being held under the theme, ‘Awakening a sleeping giant’.

Director General of Tourism, Donald Sinclair, in an interview with the Government Information Agency (GINA), said  that during the festival, various ways will be explored to combat the infestation of the disease. 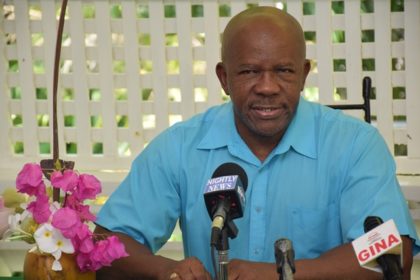 Sinclair said that two overseas experts will share information on how the coconut Red Palm Mite infestation can be eradicated. “We recognize that it is a problem that is plaguing coconut cultivation in some parts of the country, there are some varieties that are more susceptible to Red Mite infestation than others,” Sinclair noted.

Meanwhile, authorities at the National Agricultural Research and Extension Institute (NAREI) are researching ways to fight the pest without resorting to chemicals. NAREI’s Chief Executive Officer (CEO), Dr. Oudho Homenauth, said the institute is rearing natural enemies to combat the pest and is encouraging farmers to adapt those practices.

“We talking about how we intend to, in the long term control the Red Palm mite using natural enemies instead of the use of chemicals,” Homenauth said.

The red palm mites form colonies on the underside of coconut leaves and feed on the leaves.

In December 2015, cabinet approved the sum of $49 million to fight Red Palm Mite infestation. Sinclair said the impact of the project is still being monitored. The aim of the festival is to enhance awareness of the numerous household uses for the fruit and the export value of the nuts, leaves, branches and trunk of the coconut tree.