Despite a gradual start, Region Eight 2017 works is halfway through.

In a recent interview with the Department of Public Information (DPI,) Regional Executive Officer (REO), Gavin Gunga explained that when he assumed office in May of this year, the region’s performance was at 17 percent. 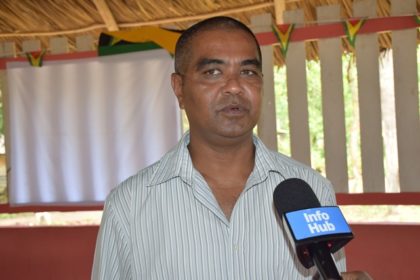 Five months on, the region has now completed, 50 percent of its works, Gunga said, adding that awards for several major projects are at the evaluation stage with National Procurement and Tender Board Administration (NPTAB) and once granted, works will commence immediately.

Gunga told the DPI that when he assumed office in May of this year, it was discovered that major contracts had not yet been approved by NPTAB.

“The then REO and engineer, for whatever reason they did not see it fit at that time, to have the project awarded. I don’t know what went wrong causing these projects not to go out earlier…since I took over we’ve pushed through the work faster,” Gunga explained.

In order to be upgraded to the status of a regional hospital, the Mahdia District Hospital is expected to undergo rehabilitation to facilitate modern amenities.  This will provide residents with easier access to healthcare providers, and specialised doctors and life-saving surgeries. It also negates the need for residents to travel to the Georgetown Public Hospital Corporation (GPHC), Gunga underlined.

Meanwhile, apart from the major upgrade of internal and external roads in the region by the Ministry of Public Infrastructure, the regional administration is also upgrading roadways that link villages in the North Pakaraimas. There will also be rehabilitative works conducted on the Kato and Kopinang, Paramakatoi airstrips. “They are all being extended and resurfaced to accommodate safe landing of aircraft. The works are more than 50 percent completed,” Gunga said.

The REO is optimistic that the region has a bright future ahead and will see major improvements.

Former REO, Rafel Downes, was relieved of his duties in May, more than one month after a Parliamentary oversight committee expressed displeasure at his performance. A letter from Finance Secretary of the Ministry of Finance, Hector Butts, to the Downes stated that the revocation of his appointment as Region Eight’s Regional Executive Officer (REO) was because of a dereliction of his duties.

The administration has vowed a zero-tolerance stance against non-performance and corruption against public servants.