Key government ministries and a number of support agencies have pledged their continued support towards ensuring that poverty is alleviated in Region Six among single mothers and other vulnerable groups. 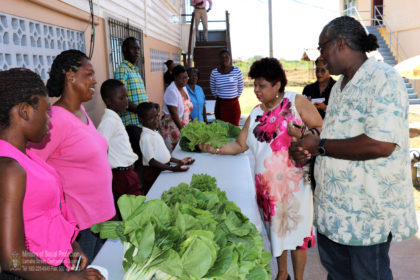 Minister of Social Protection, Amna Ally examines produces on display by some of the single parent farmers

Speaking at the launch of the programmes, Country Representative, Food and Agriculture Organisation (FAO), Rueben Robertson said the development is a step towards poverty alleviation in Region Six. “It is the first step of moving the beneficiaries out of poverty,” Robertson noted.

“Prior to 2015, many of our young people, many women, many organised entities were not given the opportunity to empower themselves. Many existed in a conundrum of poverty some endured stress to give their families a good life,” the minister noted.

The Ministry of Social Protection has committed to the overall development and empowerment of the beneficiaries by contributing $5M to the programme.

The single mothers and other families benefitting from shade houses were drawn from a number of villages including Limlair, Kildonan and Fyrish,  Corentyne, East Berbice. 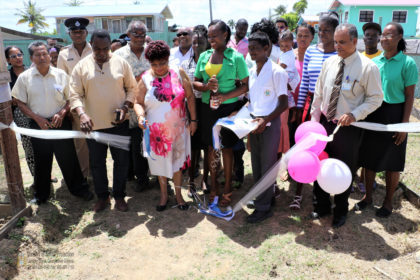 Minister Amna Ally, commissions one of the shade houses built from the practical agriculture curriculum at the Lower Corentyne Secondary School.

The programme is being spearheaded by the St. Francis Community Developers group in Rose Hall, Corentyne. The Non-Governmental Organisation has been working to create independent communities while promoting diversified, people friendly activities that would guarantee residents a better life.

Alex Foster, representing the NGO, noted that the programme was delayed for some time but, was finally being realized. He expressed confidence that the beneficiaries will capitalise on the commitment of government and other concerned agencies.

Technical support for the programmes will come from officers of the National Drainage and Irrigation Authority (NDIA), National Agricultural Research and Extension Institute (NAREI) and the Fisheries Department of the Ministry of Agriculture.

A representative of the Felix Austin Police Training College said that produce grown under the shade house will be consumed by trainees of the police programme which will eventually save money on their food bill.

The aquaculture pond in the compound of the St. Francis Community Developers group, will serve as a hatchery for approximately 10,000 tilapia fingerlings every eight weeks.

Other Support agencies include the Food for the Poor Inc. and the Regional Democratic Council of Region Six.