The Minister of Public Security Khemraj Ramjattan yesterday donated a number sports gear to the Scottsburg Sports club in Berbice, Region Six. This was as a result of a request made by the executive committee of the sports club.

Minister of Public Security Khemraj Ramjattan handing over the sports gear to President of the Scottsburg Sports Club, Lawrence Mentis.

Minister Ramjattan noted that the donation would allow community’s youths the opportunity to be gainfully occupied. “We want to get the kids off the negative attitudes and the negative approaches,” he remarked.

He also called upon the executive committee to ensure that the equipment is properly cared for and that no child is restricted from use of the gear or the sports ground.

“We need the executive committee to get all the kids in and around the area so that there are no complaints that they are exempted from the club.  And as much as possible, all the gear that the club would have, is going to be spread around so that all the youths of the area are going to benefit.”

President of the club, Lawrence Mentis expressed his gratitude for the donation which he described as instrumental to the club’s performance in upcoming competitions.

“I am thankful for this because it will make us more equipped to play our future competitions and get everybody set. Better things are in store for the future,” Mentis enthused. 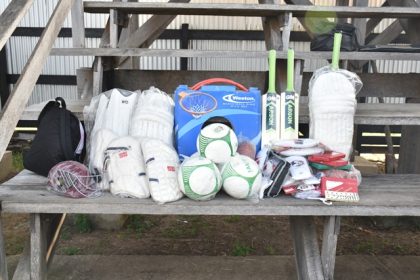 The sports gear donated by the Minister of Public Security, Khemraj Ramjattan.