Today, Minister within the Ministry of Natural Resources Simona Broomes and Commissioner General of the Guyana Revenue Authority (GRA) Godfrey Statia met with miners in the Region Seven community of Bartica to address their concerns. During this engagement the small miners committed to complying with the new tax measures but are asked for the assurance of lands to mine. 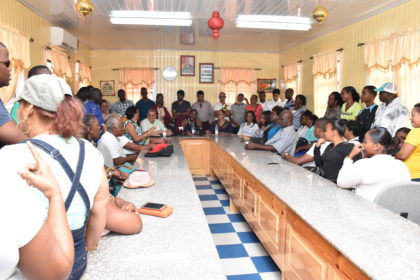 The GRA head assured that the new tax measures would not adversely affect small miners. Rather, Statia explained to the miners – who overfilled the boardroom of Bartica’s Regional Democratic Council (RDC) office – that the taxes were part of encouraging greater compliance and intended “to put some semblance of order”  in the sector.

Statia pointed out that an analysis of available information revealed that close to 30 percent of all gold that has been produced has not been sold to the Guyana Gold Board.  The introduction of the new tax measures seeks to address this short fall. “This law is not structured to catch small miners,” Statia assured miners.

The new tax measures include increase in tributors tax from 10 percent to 20 percent and the payment of a two percent tax and the requirement of all miners to file their income tax returns. “Once you keep you records and you pay your two percent and you file your returns and you show me that you should not have paid the two percent, the government is going to give you back your two percent,” Statia told miners. 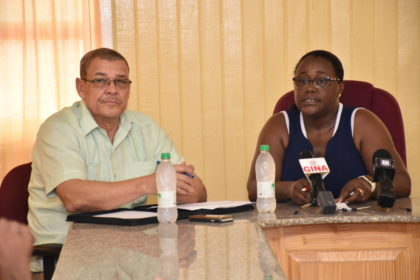 The GRA head said that a booklet explaining the new measures, and how it will be implemented, will be distributed to miners. The booklet will also outline the options available to miners regarding the tributor tax.

Statia stressed the importance of proper record keeping while acknowledging the difficulties of obtaining a receipt for certain transactions in the mining sector. “This is not a tax that is going to tax you out of the industry. I care about you paying your rightful tax…regardless of where you may be. That is important,” Statia further assured miners.

Following the explanation by the GRA head, miners expressed their confidence in the new system and a willingness to give it a try. “I think until now most of us in this boardroom was suffering from lack of information,” Bartica resident and miner Hulbert Knights said in thanks for the explanation provided on the new tax measures. 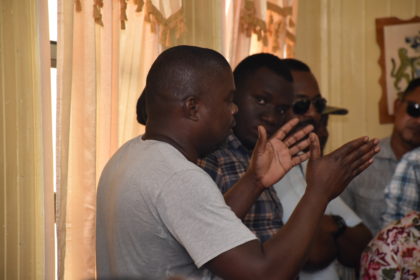 Arthur Thorne, a member of the Parika Mora Small Miners Association, noted that the new tax measures could protect small miners and labourers against exploitation in the sector. “When you have a good tax system they cannot deny you didn’t work with them. The tax is good for us,” Thorne said in the meeting.

Another miner, Desmond Hamer, thanked the GRA head for making himself available to small miners and said he is looking forward to the publication of the booklet. Hamer noted that small miners would often time engage in “runnings” because they were not complaint. “Now that systems are going to be in place we’ll work with the government,” Hamer said.

David Daniels, a small miner, called on the government to ensure that lands are available for small mines. 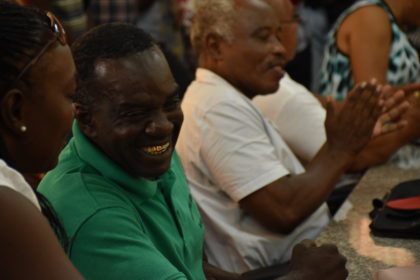 However, miners pointed that they are still challenges that they will face such as registering labourers. Workers in the industry often times do not have the required documents for paying taxes such as identification cards and Tax Identification Numbers (TINs). “How do you suggest we deal with that knowing especially how expedient it is for us to have workers,” Knights questioned.

Statia explained that the GRA is looking to provide a TIN to workers who are issued with a privilege from the Guyana Geology and Mines Commission (GGMC). “We’re going to look at the privilege process to ensure that that works and should solve that problem,” Statia said. Miners also grilled the GRA head on how to obtain their compliance documents among other concerns relating to the new tax measures. 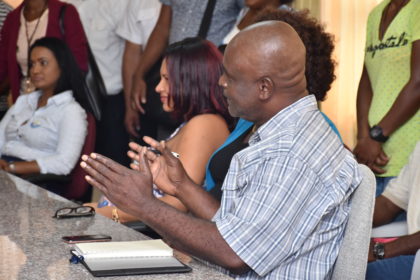 “We know that these things take time so I would not be pushing to immediately enforce the laws. By the end of the year we should be getting everything in place,” Statia assured miners.

Meanwhile, Minister Broomes told miners that a help desk will be set up at the offices of the GGMC to assist miners to comply with the new measures. “You want to try to make up your book? You want to find out something and all of that? We will undertake that you could come in and get some assistance,” Minister Broomes said.   The Minister reminded the miners that these services will be of no cost to them.