Youths living in and around the Paradise Community Centre Ground on the West Coast of Berbice will soon be able to host sports events at night following the installation of 10 solar floodlights. 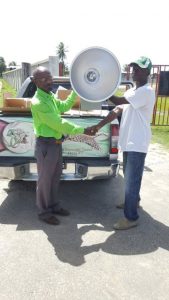 Chairperson of Profit-Rising Sun Neighbourhood Democratic Council (NDC), Emile Wilson disclosed that the NDC, which has responsibility for the community ground, received the floodlights from the regional administration on July 10.

The distribution of the lights to the community forms part the National Sports Commission’s ‘Light It up Campaign’ which aims to equip sports grounds countrywide with adequate lighting.

Wilson told the Department of Public Information (DPI), the NDC has so far installed four posts for the floodlights and will have the remainder positioned shortly. He said the rehabilitated playground was commissioned by the Ministry of Social Cohesion earlier this year fulfilling a long-awaited goal.

The chairperson added, “there is much more in store, that needs to be done to ensure that the community ground is up to standard; ensuring more youths will be able to utilise the facility. That way we provide them with the necessary space to keep them motivated and positively occupied.”

According to Wilson, $8Million was spent on erecting a fence around the ground. Upgrades to the sanitary facilities are also slated and bleachers erected. In 2017, the community received a grant for the rehabilitation of the playground, through the Ministry of Social Cohesion. The Paradise playground has served as the venue for a number of sporting activities throughout the years.