“Solutions are in the pipeline…” Agriculture Minister and team conduct successful meeting with Parika Farmers.

Agriculture Minister Noel Holder yesterday met with several farmers of the Parika Back area to listen and offer solutions to problems they have been facing. The meeting was held at the Parika Back Primary School and saw representatives from the Water Users Association of the region and cash crop farmers present. 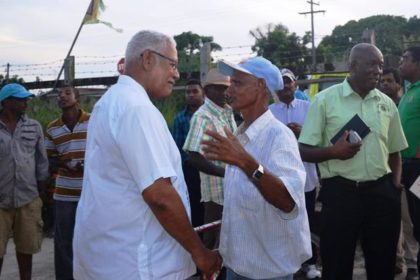 Minister Holder engaging a farmer after the meeting

Among some of the issues raised was that of irrigation of lands used for cash crop farming in the area. Mr. Roopnarine Ramsaran, a cash crop farmer aired concerns that many cash crop farmers were not satisfied with the irrigation systems set in place. “We are not getting any water during the rice harvesting season and we are losing crops.” Mr Ramsaran said. In response to those complaints Secretary of the Boerasirie Conservancy Board Mr. Hafiz Azeez stated that farmers did not request to have water released into the system. “We cannot leave the water to flow constantly as that would result in wastage and flooding of the rice fields. Farmers are asked to come to us and request that we open the channel to have water to irrigate their farms. For this entire week we have not received any request by farmers to have water.” Mr. stated. Mr. Ramsaran also indicated that the construction of a sluice to irrigate the area would relieve a lot of the problems they are facing.

Permanent Secretary of the Ministry of Agriculture indicated that they are currently finalizing their 2017 budget and will review their projects with the aim of including the construction of a sluice for the area. Additionally, CEO of the National Drainage and Irrigation Authority (NDIA) Mr. Freddy Flatts committed to conduct a series of investigations into irrigation issues raised by the farmers. Mr. Jervis also committed to raising some of the issues with the Permanent Secretary of the Ministry of Public Infrastructure and the Regional Executive Officer. Mr. Jervis indicated that with the construction of the Parika to Ruby all weather road that the Ministry of Agriculture recently completed, the region no longer has to budget to carry out maintenance works there. “The region previously budgeted to maintain the Parika to Ruby access road but with the construction of the all-weather access road they no longer have to budget for those projects.” Mr Jervis said. 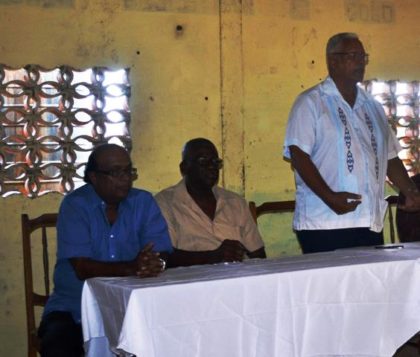 Mr. Jervis pointed to the fact the stealing of fuel from NDIA machines working in the area would have a negative impact of how effective machines are in the area. “The cost of operating these machinery exceeds $12,000 per hour and that is just the operating cost. When we factor in the cost to maintain and transport these machinery we are looking at hefty sums of money. When we send machinery into the region to do work it is coming to do work virtually free. When farmers steal fuel and others remain silent it will affect everyone who would have ultimately benefited from the works to be carried out.” Mr. Jervis said.

Representative of the Water Users Association (WUA) Mrs. Taitree Jaigobin stated that the WUA would have rangers that would assist in monitoring the operations of the drainage and irrigation structures and machinery carrying out works in the region.

The Packaging Facility at Parika

General Manager of the New Guyana Marketing Corporation, Mrs. Ida Sealey-Adams indicated that a section of the packaging facility at Parika will soon be established for processing. “We are currently in the process of re-establishing the facility. In its initial stage, we have plans to start producing several varieties of chips and works are also in the pipeline to have a section for general processing of other commodities. Once these adjustments have been made, we will be putting plans in place to source all the produce needed from the region. This will significantly reduce cost of production.” Mrs Sealey-Adams said. However, Mrs. Sealey-Adams stressed on the need for consistency in the supply of these commodities. “We do not want to find ourselves in a situation where farmers supply us one day and then the next day they cannot supply us. That will weigh heavily on the operations of the facility.” Mrs Sealey-Adams added. 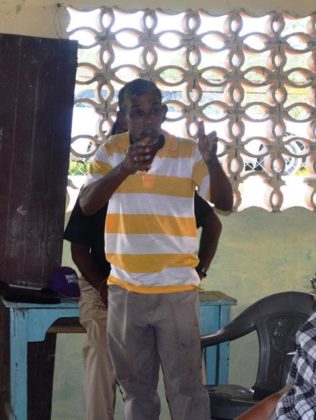 Mr. Roopnarine Ramsaran while airing his issues during the meeting

Persons who are currently practicing cottage processing were also encouraged to engage the GMC for assistance as concerns were raised by them of not satisfying the standards of the Government Analysist/ Food and Drug Administration (GAFDA). Mrs. Sealey- Adams indicated that the GAFDA has set guidelines and standards that must be met in order for them to consider produce safe for human consumption, resale and export. She also added that persons who have small scale processing operations would be issued with a manufacturer’s certificate from the GAFDS once it satisfies the standards. Minister Holder indicated that the Government of Guyana does not discourage small scale processing. “Many small scale agro-processors do not operate at state of the art facilities but they follow guidelines in order to have their products up to standard.” Minister Holder added.

Most farmers said that they have no recurring issues with livestock in the area. However one farmer, Mr. Ramsaran indicated that as a result of failed experience he prefers to practice natural methods of reproduction.

CEO of the Guyana Livestock Development Authority (GLDA), Mr Nigel Cumberbatch, indicated that if farmers are desirous of improving their herd they should try the Artificial Inseminations (AI) services offered by GLDA. Adding to Mr. Cumberbatch’s statement, Dr. Premnauth Tihul, a GLDA veterinarian attached to the region mentioned that the authority is currently conducting several studies and is having very good results as it relates to the AI and Embryo Transfer Programs. “The issues we are having in this area is that the animals are subject to excessive sun exposure which would result in their stress levels increasing. This would result in failed AI and Embryo Transfers.” Dr. Tihul said. He added that these programs would greatly aid in the area of milk and beef production.

Minister Holder in offering closing remarks thanked the farmers for coming out and assured them that their concerns will not fall on deaf ears. “We are working on solutions to many of the problems expressed today so you can rest assure that solutions are in the pipeline.” Minister Holder stated. The Ministry of Agriculture is currently observing Agriculture Month and continues to exercise its mandate which is to ensure the formulation and implementation of policies and programmes which facilitate the development of agriculture and fisheries in Guyana. Additionally, the ministry seeks to contribute to the enhancement of rural life, sustainable improvement of incomes of producers and other participants in the agricultural production and marketing chain, and the maintenance of a sound physical and institutional environment for present and future productive activities.