The entrepreneurship programme targets youths from ages 18 -25 years, and will last for three-and-a-half months.

The pilot programme will see collaboration among the Ministries of Public Security, Education, and the Small Business Bureau (SBB) which falls under the purview of the Ministry of Business, and the Inter-American Development Bank (IDB) which is funding the programme, along with YouthBuild USA Inc.

The aim of the programme is to keep youths who have been abused, who are school drop outs and teenage mothers among others out of possible negative activities. Additionally, the programme also guides the youths into entrepreneurial activities.

Minister of Public Security, Khemraj Ramjattan said that the programme is in keeping with the government’s and his Ministry’s mandate to eliminate crime among young people. The Minister said that based on a number of researches that have been conducted locally and internationally, the programme is designed based on the outreaches conducted. The Public Security Minister urged the participants to not quit because the replication of this programme across the country depends on the success of the pilot one. 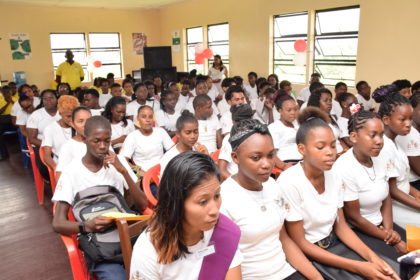 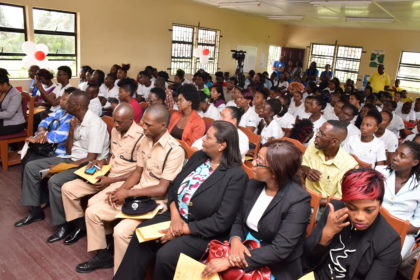 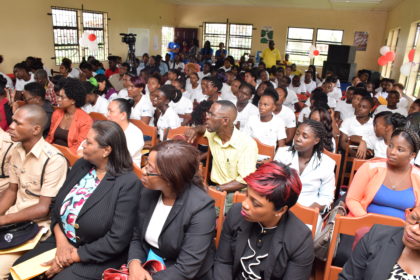 Minister Ramjattan said that this programme under the Citizen Security Strengthening Programme (CSSP) aims to contribute to a reduction in crime and violence in Guyana, especially in the targeted communities and among youths, by increasing their human and social capacity. The specific objectives of the project are to: improve behaviours for non- violent conflict resolution in target communities among others.

The implementation of community-based preventive and restorative strategies is a core component of the CSSP.  The Community Crime and Violence Prevention component aims to reduce crime and violence in targeted communities through: (i) strengthening the participation of residents, agencies, and businesses in community decision-making; (ii) building community leadership in violence prevention; (iii) promoting community cohesion; (iv) improving well-being and socio-economic conditions; (v) influencing the implementation of effective public policies that address risk factors associated with crime and violence; and (vi)  promoting recognition of the strengths and capacities of Guyanese communities and groups in preventing violence. 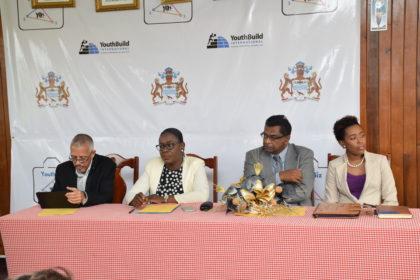 Members of the Head table at the launch -. From left- Minister of Business, Dominic Gaskin, Minister within the Ministry of Education , Nicolette Henry, Minister of Public Security, Khemraj Ramjattan and Chairperson , Small Business Bureau, Valerie Grant

Minister of Business, Dominic Gaskin encouraged participants to be responsible and urged them to start thinking and planning for the future even as he expressed happiness that youths have been given another opportunity to empower themselves.

Minister Gaskin said that the programme will teach the participants “not just how to create businesses and to make money, but to responsible adults who are capable of setting your own goals and managing your time, becoming role models for others.”

Additionally, the Business Minister said that the programme will impart knowledge on relationships, ownership and put them on the path of success.  Minister Gaskin expressed happiness that the Ministry of Education is part of the programme because “there are competent professionals within the organisation that really care about the youths of Guyana.”

Minister within the Ministry of Education, Nicolette Henry said that youths are very important to the government. The Minister said that the “stereotype that goes along with villages must end. She noted that through the eyes of her Ministry and government they “see young people who are strong and possess enormous potential.”

Chairperson of the Small Business Council, Valerie Grant pointed out that owning a business is hard work that requires individuals to wear many caps. She highlighted to the participants that the “entrepreneurship role” is filled with challenges, but she urged the youths that “hard work will pay off.”

Dallyan Donald from Port Mourant, Berbice who is a single mother told the Government Information Agency (GINA) that she is grateful for another opportunity to be educated. Donald said that her main aim is to “keep her promises to her three children” through the programme.

Felicity Daniels from Sophia said that the programme has “taught her so much thus far.” Daniels said that her aim to own her own business and the programme will ensure that.

The youths are being schooled in the areas of literacy, and parenting skills, and there is also focus on gender.