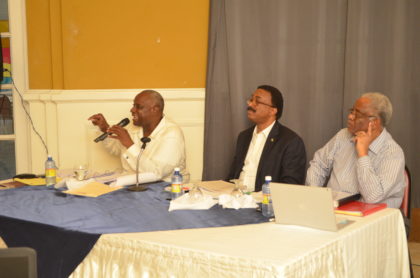 State lawyers and some judges were part of the training session. Minister of Legal Affairs Basil Williams noted, “It is imperative that we have state lawyers being introduced to the rules.”

In November, the Legal Affairs Minister laid New Civil Procedure Rules for the Supreme Court in the National Assembly on behalf of the Rules Committee. These new rules will replace the existing rules and are designed to ensure parties are heard and not unjustly prejudiced, Minister Williams said.

“The court must be actively involved and arrive and try to get to justice so a lot of the technicality that would have been applied and prevent persons from actually having a hearing in court, all those things will be removed under the new rule,” Minister Williams explained.

Today‘s session was conducted by Legal Consultant Anthony Ross, QC and Justice Courtney Abel from the Belize High Court. Ross encouraged the state practitioners to “become involved as part of the process.” 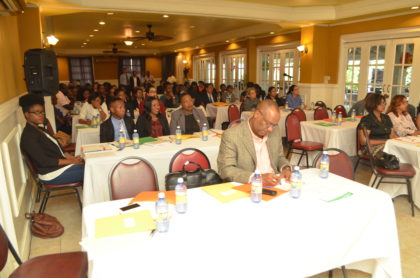 State legal practitioners and other guests at the trainings session

“Government lawyers have a special interest every time there is a constitution issue you going to be involved…as far as adjournment is concerned its costing your department money as far as experts are concerned you’ve got to understand that expert evidence is an exception to the…rule and you must have something on which you’re going to stand,” Ross said in opening remarks. Justice Able led interactive exchange on case management and pre- trial law.

Also present at the training were top judicial officers in the Caribbean, including the President of the Caribbean Court of Justice, Sir Dennis Byron. The delegation arrived in the country on Friday.

The training is the beginning of a series of training sessions that will continue into the new year Minister Williams pointed out. “We hope that in the new training we have both state and lawyers at the private bar will be involved in it.”

The new Civil Procedure Rules have been brought in line with similar rules in the Caribbean. The Rules and legal forms span 187 pages and contain procedures for the settlement of civil matters and make payments both in and out of court. The Rules will also reduce clogging of courts by matters that could be settled.