Guyana’s sugar industry is being revitalised and repositioned to once again thrust the economy forward, ensuring a bright future for all.

This assurance was given by Attorney General (AG) and Minister of Legal Affairs Basil Williams, S.C., who told celebrants at the 71st Enmore Martyrs day, on Sunday that the industry is not on its “deathbed.”

Addressing hundreds at the Plantation Enmore, East Coast Demerara Monument, AG Williams noted that the government’s vision for the industry remains the same.

Attorney General and Minister of Legal Affairs Basil Williams, S.C., lays a wreath at the monument of the Enmore Martyrs.

The audience, including Ministers of Government join in the singing of “Internationale”.

“President David Granger has assured workers that the sugar industry is not being closed. It is being right-sized, restructured and reformed in order to make it sustainable and profitable,” he told the sizeable crowd.

He said however that the industry needs “cooperation, not conflict and confrontation.”

“My call today is to echo the appeal made by His Excellency for all stakeholders to work together to ensure the survival of the sugar industry.”

According to AG Williams, the reality of the crisis in the sugar industry cannot be ignored. Between 2009 and 2014, the Guyana Sugar Corporation (GuySuCo) racked up more than $50 Billion in losses. Its debt now stands in excess of $82 Billion while cost of production far outstrips the prices obtained in the export market.

“We want to make life better for all in the sugar belt. Let us therefore work together to turn this industry around,” he urged.

This, he believes will be a most fitting tribute to the five brave sugar workers who had their lives snuffed out as they protested what they considered an unfair system at that time.

On June 16,1948, Rambarran, Pooran, Lallabagee, Surajballi and Harry were killed by colonial police during a strike at the East Coast Demerara estate. The five martyrs were among a larger group of workers, many of whom were also injured, who were demanding better working conditions.

According to the Attorney General, the sugar workers took strike actions in hope of creating new arrangements relating to their work, unionisation and social conditions. Enmore, he said, must not be looked at as a tragedy.

“It should be looked at, also from the perspective that the worker’s struggle to bring about a new social compact in the sugar industry,” he posited.

According to AG Williams, 71 years after, the sugar industry finds itself once again in need of a new compact in industrial relations.

He noted, “seventy-one years after five sugar workers laid down their lives for the improvement of the lot of sugar workers, we owe it to them to do our best to ensure that this industry continues to contribute to the development of the people who depend on it.” 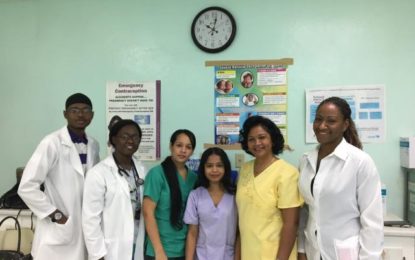