An inter-Ministerial task force conducted a follow-up visit to the village of Baramita over the weekend, to ensure the successful implementation of strategies developed to address the social issues plaguing the community.

The Baramita Community, Region One.

The team, which was led by, Permanent Secretary, Alfred King from Ministry of Indigenous Peoples’ Affairs, also comprised representatives from the Ministries of Education, Agriculture, Natural Resources, Social Protection, Health, Social Cohesion as well as UNICEF and the Guyana Geology and Mines Commision (GGMC).

Baramita is the largest Amerindian settlement in Guyana, and the biggest Carib Village in the Caribbean, with a population of about 3,000.

Alcoholism, suicide, sexual and domestic abuse are just some of the social issues affecting the development of the community, as such, the government established an inter-Ministerial task force to address those issues.

The team engaged the Village Council, teachers, health workers, law enforcement officers and the residents on the way forward, as it relates to the socio-economic development of the community.

Permanent Secretary King, explained that after several visits and careful assessment of Baramita, a number of work plans are being developed to focus on identifying the needs of the community. “This visit would have seen the advancement of  some of those formulated,” he noted,

Among the plans is the delivery of an improved quality of education to the residents, through provision of more scholarships at both the secondary and tertiary levels, and revising the school’s curriculum, the Permanent Secretary explained. 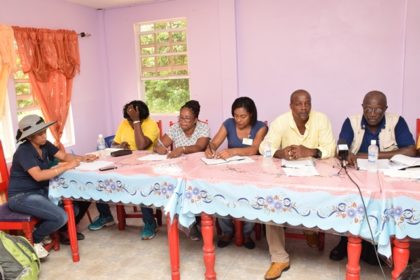 Permanent Secretaries of the Ministry of Indigenous Peoples’ Affairs, Alfred King and Ministry of Education Vibert Welch and other members of the team during the meeting with the Baramita Village Council.

children attend secondary schools in Georgetown or in the region, through scholarships. Students will also have the opportunity to attend the Government Technical Institute (GTI) and the Guyana School of Agriculture (GSA) among other technical institutions.

Visits were conducted in satellite communities located some eight miles from central Baramita, where it was observed that almost 18 school aged children, in a particular area, were not attending school due to a lack of transportation.

“That is just one of 23 such cases because there are 23 satellite communities in Baramita. Access to the school is eight miles away in the morning and eight miles in the afternoon, and some of the communities can only be accessed by ATVs” King said. He revealed that the task force is still conducting the mapping of the area so that an accurate assessment can be done and the correct solutions can be formulated to address the problem in a timely manner.

King also shared that when the first phase of the HEYS programme was rolled-out in the community last year, only eight youths expressed an interest. As such the Ministry of Indigenous Peoples’ Affairs  relaunched the programme this year, and thus far, 16 youths have expressed interest.

The Police Force also established a youth club which attracted some 120 young people, who are being sensitised on health and wellbeing and the negative effects of substance abuse and lack of education.

The Ministry of Agriculture and NAREI are developing a plan to provide technical and other support to small groups of residents who are interested in farming.

“Persons who want to rear chickens, we will provide free chicks and the technical support start up feeds for them. We brought in a number of seeds and NAREI would be working with small groups, and once we clear the areas and identify what is it they want to get involved in, NAREI and the livestock group will take the lead and take them through the process of establishing farms,” King explained.

He said that the aim is within the next five to ten years, to have Baramita be one of the leading communities in the region, in terms of development. 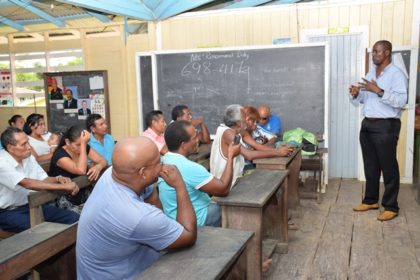 Permanent Secretary, Ministry of Indigenous Peoples’ Affairs, Alfred King during his address to the residents. 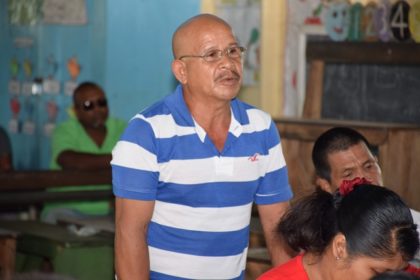 A resident raising a concern.