Georgetown, Guyana – (August 21, 2017) President David Granger, this evening, said that there is no greater investment in the world than an investment in children and their education as he commissioned three new 35-seater buses, which will serve school children in the North and South areas of Georgetown under the ‘Boats, Buses, Bicycles plus Breakfast and Books’ or Five ‘Bs’ programme. The President, who commissioned the buses at a ceremony held at D’urban Park, said that the buses will transport the future engineers, entrepreneurs and pioneers of Guyana’s future. 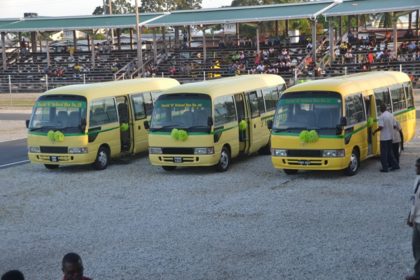 The three 35-seater buses, which will now serve the school children of North and South Georgetown.

In his passionate and emotional speech to residents of Georgetown, who gathered at the venue, the Head of State said that the Government is committed to ensuring that every Guyanese child has access to an education as it is only through education that they can gain employment and become empowered, thereby contributing to the growth and development of Guyana. “We see education as the gateway to the good life. We see that by providing these buses, boats and bicycles that we will improve access to schools; we will improve attendance and in so doing, we see improved achievement. We want to see ‘A’ students and those are the ‘A’s we are working towards today [access, attendance and achievement]. We have made transportation easier for children and we want to create a more equal society so that they children in Mabaruma, Jawalla and Aishalton would have an equal opportunity to education as the children in Sophia, Industry or Cummings Lodge,” he said.

The President noted that investment in a child’s education is an investment in a nation and it is up to the Government and all other stakeholders to ensure that they are equipped and provided with the opportunities, which can help them to create a bright future for themselves, their families and their country. The Head of State said that the buses will not just be transporting school children, but the future engineers, scientists, entrepreneurs and pioneers who will take Guyana forward in the years to come.

“You don’t need to bring foreigners to process your bauxite. You don’t need to bring in foreigners to manufacture products from timber or gold. You can have the education to do it yourself in due course. Gradually, year after year I want to see more Guyanese doing the same things that the foreigners have been doing for the last 100 years.  It is the children, who will be going to school in these buses, who are going to be controlling our petroleum industry 10 and 20 years from now. I want to see a nation of owners not a nation of observers; owners of our resources. The owners will be the educated people that we will be sending to school in these buses. I want to see rich Guyanese, not poor Guyanese. I want to see independent thinkers, not dependent workers,” he said.

Noting the challenges in the sector, the President said that his administration will not be deterred from its mission until every Guyanese child is in school and stays in school. “Let us keep on keeping on until every Guyanese child can get to school. An education nation will also grow empowered people. We are not demanding anything from the citizens but we are giving them something; educating them, employing them and empowering them. This is not political and partisan, it is a national service. You have elected us to serve and we are serving you. When you go into these buses, you will be travelling the highway to education, the highway to employment and highway to empowerment. These buses will not only take us to school but on the road to full employment. We have transformed this country from an ethnic consensus to a platform for empowerment,” President Granger said.

Further, the Head of State said that it is for this reason that he established the National Endowment for Science and Technology (NEST) programme, which provides funding to schools to support Science, Technology, Engineering and Mathematics (STEM) initiatives. Guyana, he said, must begin to produce empowered young people who are versed in these areas and can positively develop the rich potential of this nation into real benefits for the citizens.

“I give money to schools, which have science facilities and laboratories and I don’t care about race. don’t care about location. I don’t care about religion. Hindu schools, Muslim Schools, Christian schools have gotten money and as long as you are teaching Guyanese children, you will get money for science and technology. Guyanese you are living in the largest CARICOM state, the most beautiful, the most bountiful, but yet the largest region in Guyana; the Rupununi does not have a proper highway. Our rivers do not have proper stellings.  Some of the aerodromes need repairing and refurbishing. Who will do it? Foreigners, no! We have to train a generation of Guyanese engineers and mathematicians; children, who 10 or 20 years from now who will be going in these buses will become our engineers,” he said.

President Granger expressed gratitude to the donors, noting that it is heartening to see so many persons becoming involved in the mission to educate every Guyanese child. “I would like to thank the donors because these buses did not come from state funds. These buses came from citizens with a conscience; private citizens who want to see the best for Guyana’s children,” he said.

Meanwhile, Minister of Social Protection, Ms. Amna Ally, who has been coordinating the Five ‘Bs’ programme, said that its implementation is testimony to a caring Government with a vision to take Guyana to new and greater heights. She noted that the Government is responsive and proactive to the needs of the people and will through every means necessary, seek to address social ills and inequality issues, specifically issues that impede children and young people from reaching their full potential in life.

“We have a President that believes in reducing poverty, reducing inequalities and providing a good life for all. This administration will invest because education is a key cultural and social right and plays an important role in reducing poverty as well as promoting democracy. Peace, tolerance, development and economic growth throughout Guyana. We will invest because we recognise that education is both a human right in itself and an essential means of realising other human rights. As an important empowerment right, education is the primary engine by which economically and socially marginalised adults and children can lift themselves out of poverty and obtain the means to participate fully in their communities,” she said.

Through education, she said, children will be safeguarded from exploitative and hazardous labour and sexual exploitation and infringement on their human rights.  “This programme has become extremely successful because now we are bridging the education gap between hinterland and coastal regions by providing improved access to transportation for school children to get to and from school. Students are now able to get to school on time and parents are no longer burdened with transportation expenses. No longer will education be a distant dream for your children because they reside in rural or hinterland areas or because you cannot afford transportation cost. Under the David Granger Five ‘Bs’ programme we will ensure that all our children continue to have access to transportation,” she said.

Minister Ally said that access to education must not be seen as a privilege for some but as a basic human right for all Guyanese children and every child or teenage boy or girl must be able to thrive in order to support the future of high productivity, innovation and economic growth.

“I want to assure you that we are deeply committed to building a nation where all children, regardless of their gender, socio economic background or circumstances, have access to free, compulsory, equitable and quality education. We will not permit the unique talents of our young people to fall by the way side.  We will and intend to provide safe learning environments, text books, support for parents and transportation for our children to attend school as is evident today with the commissioning of these three school buses. Georgetown, this is one of a number of investments that our Government will make within your region there will be many more to come, especially in the area of education,” the Minister said.

Ms. Tonya Albert, a student from the South Ruimveldt Secondary School, in her remarks, expressed gratitude to the President and Government as she noted that she is proud to witness the donation of the buses as it shows a strong commitment on the part of the Government towards the development of its young people. “I am overjoyed because the nation’s children are part of this Government’s plan. This is a huge investment in our education. This action of yours will support student development and stimulate their desire to contribute to the growth and prosperity of Guyana. As we travel to school for the new school term, we will be committed, determined and focused in our pursuit of excellence. On behalf of the nation’s children, I stand here to say thanks to you and all other stakeholders involved in making this dream a reality. Thank you for investing in our education to ensuring that we can get to school,” she said.

The event was hosted by Minister of Public Health, Ms. Volda Lawrence and attended by Prime Minister Moses Nagamootoo, First Lady, Mrs. Sandra Granger, Minister of State, Mr. Joseph Harmon, Attorney General and Minister of Legal Affairs, Mr. Basil Williams, other Ministers of the Government, members of the diplomatic corps, the Executive and other members of the National Toshaos Council and scores of residents from Georgetown