The Ministry of Public Telecommunications formally launched its first Hackathon for programmers or coders to compete to develop applications for possible use in the public and private sectors. 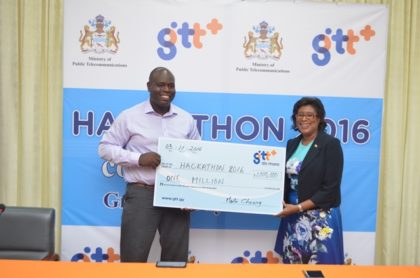 Justin Nedd, Chief Executive Officer of the Guyana Telephone and Telegraph Company (sponsor of the Hackathon) handing over cheque to Minister of Public Telecommunications, Catherine Hughes

The 48-hour event begins tomorrow at noon and is a collaborative venture with the Guyana Telephone and Telegraph (GTT) Company.

In an invited comment at the launch at the Arthur Chung Conference Center (ACCC) today, Minister of Public Telecommunications, Cathy Hughes said, the event is aimed at spurring innovation.

She further noted that it is not just an exercise, as actual programmes can be used by a real life company or government agency. Further, it’s an opportunity for the programmers to be creative and to earn money from their ICT skills.

Coordinator of the Hackathon, Lance Hinds said that the idea is to get 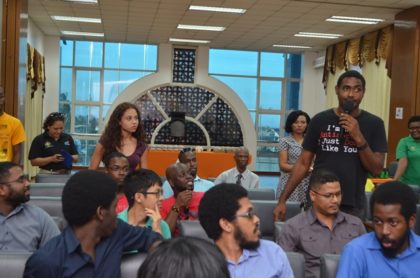 Programmers at the launch of Hackathon 2016

persons to come out and show their talents. The event “drives our policy in terms of the kind of things we need to do to move the ICT sector forward. Many people showed interest in the Hackhathon, there is even a team participating from Suriname.”

A member from Team Code Ups from Suriname said he looks forward to working with Guyanese programmers and to see how best they can integrate with other countries. They look forward to building relationships, so as to better technology businesses, he said.

Rowen Willabus, member of local team Intellect Storm said they recently won a competition in Jamaica, and he was looking forward to the community growing from this, and for persons to see Guyanese talents displayed.