This officers’ engagement was conducted due to the recent reports in the media regarding the abuse of office, and irresponsible behaviour of members of the GPF. 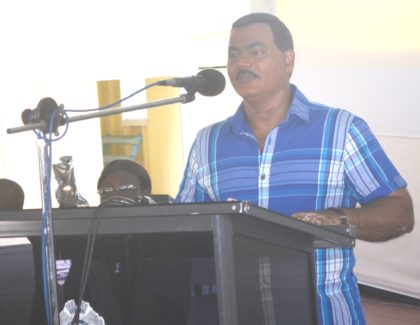 Acting Commissioner of Police, David Ramnarine during his address to members of the Guyana Police Force, at the Officers’ Mess Annexe

“There are certain matters, once you are charged, whether criminally or departmentally, we are not going to waste taxpayers’ money to interdict you, and put you on half pay, we are not going to do that, once you serve within a certain period of service, out you go, that’s where we have start to get you inline,” Commissioner Ramnarine told the ranks.

Ramnarine used the opportunity to reflect on some of the recent embarrassing and disappointing reports against ranks of the force.  Recently, at the Police Training College, there were three incidents of theft of cell phones; five instances within the last two weeks, and young constables were tested positive for drugs in their systems. Two of the latter were immediately dismissed.

In Linden, there was a breakage at the Guyana Telephone and Telegraph (GTT) store where cellphones were recovered and police officers took the items and split them among themselves; and a recent incident of a police officer driving a minibus which resulted in an accident that killed one person and injured several.

There were also incidences of police officers engaging in fights among themselves in the public, ranks carrying out unnecessary road blocks, arresting persons needlessly and involved in criminal acts.

These are just some of the incidents which resulted in the dismissal of about 28 police ranks, Ramnarine said.

“Can you imagine that ranks that were trained on values and principles and took an oath would go low to turn praise and honour into a major disappointment and a criminal act?” Ramnarine asked.

He reiterated that actions will be taken against any rank who seeks to use their office for their own self gain or to harass citizens.

“… the mechanisms are in place on how to deal with our agents and that is what we are doing, that is what we will have to continue to do until we get the message to you. We have to be skilled and professional in our actions, a tower of strength and virtue, and accept that all of our actions have to be subjected to continuous public scrutiny,” Commissioner Ramnarine emphasised.

Commissioner Ramnarine said that gone are the days when it took 10 years to be eligible for promotion. Today ranks serve as little as four years and are promoted from constable to superintendents, deputy superintendents and corporals and, ranks are now only given four months of training to get into the force.

It is also clear he said, that despite the fact that there is a better quality of intake at the recruit level, issues such as functional illiteracy and others abound.  He said the force needs to return to the full package of seven to eight months of training in order to deal with some of those issues.

“One can only imagine that there are already challenges in your behavioural pattern and your attitude when you graduate after seven months and worse are likely to happen with a four- month package. On that fundamental line of reasoning alone, we need to review several things,” the commissioner said.

Commissioner Ramnarine urged the ranks to live by the principles of the GFF and the UN Code of Conduct so as to foster a better working relationship with the citizens of Guyana, who have long lost confidence in the force.