Prisoners are soon to be transported to the Mazaruni high-level security prison via a spanking new motor boat.

The $118M passenger-cargo vessel for the Guyana Prison Service is under construction at the Guyana National Industrial Company (GNIC) shipyard on Lombard Street and is slated to be completed by November month end.

Minister of Public Security Khemraj Ramjattan, on a visit to the shipyard, told media operatives that, “GNIC was awarded the contract in May 2017 to ensure that we have proper transportation for prisoners and produce for the prisoners on the Essequibo river.” 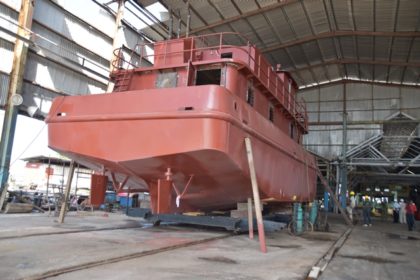 The vessel under construction, at the GNIC ship yard.

Previously, prisoners were transported to the riverain prison location by private vessels contracted by the government.

Expressing satisfaction at the quality of work and the rate at which the vessel is being completed, Minister Ramjattan said “I am no expert, but having gone in there it does appear that the GNIC is doing a good job it. I’m pleased that local people can be employed to ensure that the assets get completed on time.”

The Twin Screw Passenger-Cargo Vessel has been designed for harbour and riverain service in Guyana.

It has accommodation for 80 passengers above the main deck as well as for 60 tons cargo below the main deck ahead of the engine room.  It contains three watertight bulkheads which divide the hull into four compartments. The vessel will be designed with a free running speed of not less than minimum 12 knots and will be fitted with two Perkins Diesel Engines developing about 500HP.

Additionally, the vessel will be steel welded in construction and will be of ABS Classification Standard.