– As $18.2 Billion approved for Ministry of Social Protection

The sum of $13.2Billion was approved for the distribution of old age pension, as the National Assembly this evening, unanimously passed the Ministry of Social Protection’s $18.2 Billion budget.

During the consideration of the National Budget Estimates, this evening, Minister of Social Protection, Amna Ally noted that a total of 54, 000 pensioners across Guyana will benefit the sum allocated. 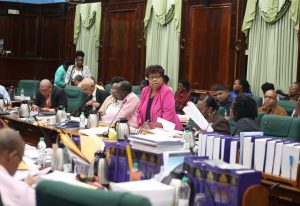 Minister Ally also confirmed that $1.2Billion was also allocated to provide public assistance to 12,000 persons qualified for this support.

Also approved was the sum of $250Million for the execution of community development projects under the Sustainable Livelihood Entrepreneurial Development (SLED) programme.

In response, Minister Ally explained that the programme is based on requests made by community groups in each of the ten administrative regions. She confirmed that this year, several programmes will be executed in communities across Region Six including Glasgow, Angoys Avenue, Fyrish among other areas. Minister Ally further stated that a total of 1,264 persons.

A total of $10 Million was allocated for technical assistance for studies to examine the gender inequalities in the education system with specific emphasis on underachievement of boys.

Another $20Million will cater for expenditure reviews targeting the poor and vulnerable; alternative payment systems based on geographical consideration and preparation of Social Protection Strategies and development of a strategic plan and sustainable financing model.

Additionally, $49.7Million will be expended for the completion of a Drop-in-Centre at Sophia and enclosure of a building at Whim in Region Six. Minister Ally explained that the structure at Whim will also cater to children in state care.