Wales Primary School located on the West Bank of Demerara in Region Three has received a $14Million upgrade. 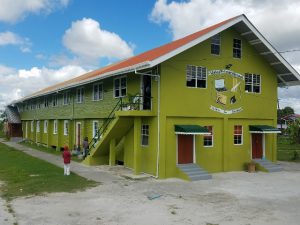 Regional Executive Officer, Denis Jaikaran, in an invited comment, said “…it was in June when I spoke with DPI and gave assurance that Wales Primary School would receive an overhaul. Well, today we have what I will term a brand-new school and I will ask that the direct beneficiaries care the building.”

Headteacher of the institution, Florence Batson noted that “no teacher or child should be existing in an environment that is not conducive to learning and that was the situation at Wales Primary for years. We had to improvise on countless occasions and today I am happy with the complete rehabilitation that was received… Our first visit to the REO’s office resulted in his attending our PTA meeting where he indicated that work will be done and today that work is completed. I must thank REO wholeheartedly for responding to our calls.”

Primary Education Officer, Oslyn Benn-Caeser commented on the improved environment for the teachers and pupils.

“Teachers and pupils are much more comfortable now than before and I am of the strong belief that better results will be seen from this school. Often times, the success of schools academically is directly linked to the environment and availability of necessary resources and right now this is possibly the best school in terms of infrastructure so we will now await the results,” Benn-Caeser remarked.

The school currently has an enrollment of 261 pupils with eight teachers and a Graduate Headteacher.