During Friday’s ‘Government Comes to You Outreach’ held in the Mahdia, Minister of Public Infrastructure, Hon. David Patterson, spoke with the Department of Public Information, (DPI), where he described the condition of the road that the Coalition Government inherited.

“Where we are standing now was a dirt track, and at that time, the opposition had controlled this particular region. We actually staged a protest on this very same road because of the condition that it was in. Right in the front of the school [Mahdia Secondary] was in an abysmal state… So, one of the first projects that we embarked on in our urban upgrade was to pave Mahdia,” Minister Patterson explained.

With the administration spending $1Billion thus far, Minister Patterson noted that tenders are out to upgrade the continuation of the road to the airstrip.

“It is anticipated in a short space of time that when you land in Mahdia, you will be walking on nice concrete pavement,” he remarked.

Meanwhile, plans are also on stream for the roads leading into the township to be upgraded. It was noted too that an engineer is responsible for loaming the road yearly.

“This is in keeping with our vision of what a town should look like, not because it is a mining town that it should look that a certain way.” 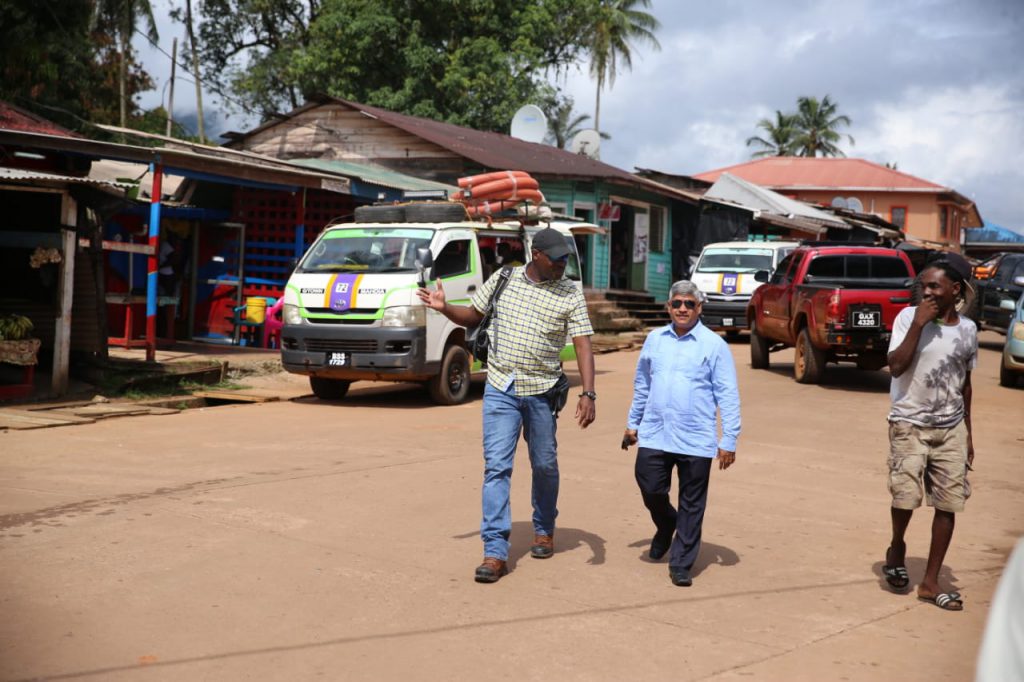 Senior and junior Ministers of Public Infrastructure, Hon. David Patterson and Hon. Jaipaul Sharma take a stroll in the Region 8 township of Mahdia on their arrival at the ‘Government Comes To You’ Outreach held on Friday, August 2.

In 2018, the internal road network project saw the rehabilitation of several bridges, the installation of a reinforced concrete rigid pavement with curbs, a network of reinforced concrete drains and culverts, complemented by road safety elements, inclusive of road markings and signage.

Among other plans on stream, the minister said a tender was also out for a solar farm for Mahdia. This farm will be funded by Inter-American Development Bank.

“So, we have done several initiatives here, including bolstering the power and light so they can get reliable electricity.”