(MOTP) Georgetown, Guyana – (October 17, 2016) President David Granger, yesterday again emphasised the importance of designing curricula that are focused  on Science, Technology, Engineering and Mathematics (STEM), which are the key areas necessary for the building for a strong, competitive economy and the development of a ‘green’ state. The Head of State, who was speaking at the Saraswati Vidya Niketan (SVN) Hindu School’s 12th graduation ceremony, said that as long as the school pursues STEM, the State will support the school and pledged $1M to bolster its science programme. 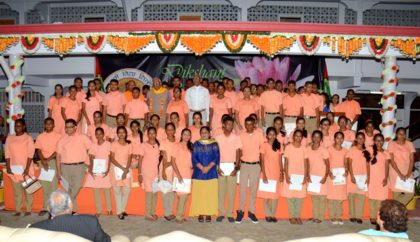 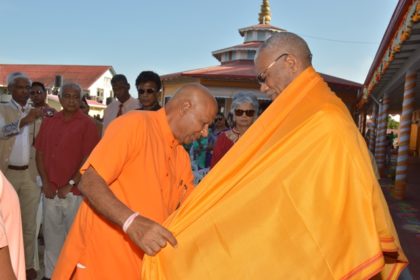 Principal of the Saraswati Vidya Niketan (SVN) Hindu School, Swami Aksharananda wraps a shawl around President David Granger as part of the ceremonial welcome to the graduation ceremony.

Delivering the feature address, the Head of State spoke of the importance of imparting strong values through the education system. He said that even during periods of slavery and indentureship, Guyanese ancestors realised that education, more than anything else, was not only the way out of poverty, but also a way of inculcating strong values.

“Our education system, despite earlier experiments, is still rooted in religion. It is still family-based. It was on the family and on the religious orders that the Guyanese poor relied for their children’s education after Emancipation and after the end of Indentureship… Our fore parents understood, from the start, that religion and education combined the sacred with the secular, the spiritual with the temporal,” President Granger said. 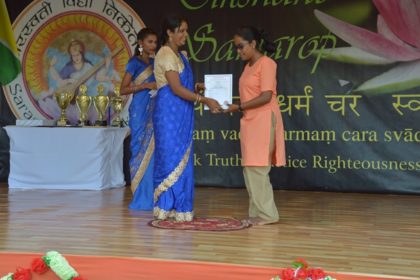 He said that Guyana is fortunate to be a nation that has been enriched with the diverse cultures and civilisations of Africa, Asia, Europe and the Americas. “Diversity is an asset, not a liability. It is for this reason why I am happy to be here this afternoon; because this very institution is monument to our diversity,” he said.

He lauded the school’s administration for producing students, who are both disciplined and who are achieving academic excellence at examinations year after year.

“The values of education are concerned with producing persons of quality. Education must edify the mind, enhance skills and emancipate the mind from arrogance, from anger and from hatred. Education can achieve these ends only if it embraces certain values and this school combines the values with value education… It equips students with the attitude, behaviour and character to become responsible members of society. Education instills respect for others, respect for authority…respect for the property of others. These are values, you don’t get this from a book,” President Granger said.

The graduation was charge was delivered by distinguished Guyanese educator, Professor Clement Sankat, who said that the achievements of SVN over the past 14 years has eclipsed that of many other schools, which have been in existence for decades. He told the graduates that in the Caribbean region and the world at large faces many serious challenges that have a direct bearing on economic development. Some of the main challenges include crime, food security, environmental management, climate change, energy and energy conservation, economic diversification, private sector-led growth, health care and lifestyle-led diseases, poverty reduction, sustainable development and trade. 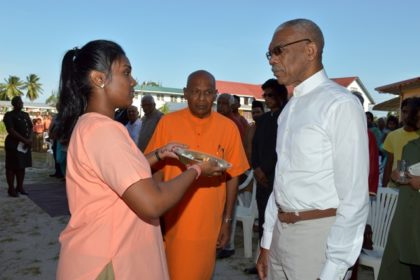 “In addition to the very noble careers that many of you aspire to, like doctors, lawyers and teachers, in this new world of the 21st century, you should aspire to a broader range of potential disciplines. This is the real world that you are facing…This century is about a new revolution, the environmental revolution and you have to be part of this,” he said.

He also spoke of the importance of Information Communication Technology (ICT) and the boundless opportunities that it brings. This sector he said, is a major growth area in the world and noted that the wave of technologically-driven activities will only increase in propensity and use in the coming years and the young generation must be prepared to participate. 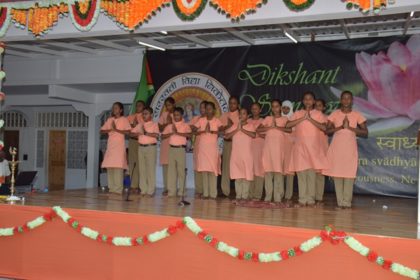 Meanwhile, SVN’s Principal, Swami Aksharananda said that the school holds the second highest position in Guyana with regard to the number of students,who graduated with 11 Grade Ones and more and Eight Grade Ones and more. Additionally, the school’s matriculation rate is over 75 percent.

He informed that the 2016 graduating batch has students, who were enrolled after less than 400 marks at the National Grade Six Assessment (NGSA) but have gained passes in over 10 subjects at the CSEC level including English and Mathematics.

“Of this present batch of students, only two would be admitted in senior secondary schools in Georgetown, the rest would not be, yet according to the performances, at least 24 of them would be in the batch of high performers,” the Swami said.