A year ago, the A Partnership for National Unity + Alliance For Change (APNU+AFC)   government merged the Ministries of Education and Culture and appointed Nicolette Henry as minister within the ministry with responsibility for culture, youth and sport.

Reflecting on her appointment one year after, the minister said her “ultimate goal is to ensure that the department is managed efficiently and effectively and that we are able to meet our mandate as it relates to providing service to the people of this country.” On her way to achieving her set goal, the minister identified some which she described as “a microcosm of the challenges that we face in our country.”

She readily identified lack of capacity in many of the areas, and the challenge to get staff, and the Guyanese public at large to understand what it means to be efficient and productive.

Minister Henry told the Government Information Agency (GINA) that she inherited what is now the department of culture youth and sport with a lot of committed and dedicated staff whom she “recognised needed some mentoring, some support and vision so that they can harness their energies in the right direction…” To surmount this challenge, Minister Henry worked with them directly. She believes that the staff do have the capacity, however they need supervision, and training.

Training and human resource development, the minister explained, has its limitations arising from the fact that, “we are in a limited resource setting, we are termed a developing country and that being said we have our constraints in terms of financial, technical and infrastructural resources and so those do put a cap on you … It’s a work in progress, we continue to work with resources that are available to ensure that we meet the outcomes that we have set ourselves so that we can deliver to the people of this country.”

“I consider that a sacred and honourable task… What has happened however, is you’re planning for a major event at a time that you’re also getting your feet wet in the ministry because it happened simultaneously.”

The organisation of the festivities surrounding the Jubilee “took a lot from me personally because I am required to double up efforts, and to go over and beyond what would’ve been expected, had I have just been looking at youth sport and culture.” Minister Henry however saw the opportunity to push herself and staff beyond their “own limits … so that we can deliver a programme that people of this country will be satisfied with.”

She opined that the planning phase to roll out a grand programme befitting the nation’s 50th anniversary is the most difficult since “you don’t see what’s happening much in the planning phase and so if you are not used to programming and planning and organising events …. you would suppose that nothing is happening.”

However, the minister is pleased with the preparations and progress for the Jubilee celebrations, “I sit here comfortable knowing the amount of work and effort my team and I have put into this so that we know that we will have a programme that is less to none, a programme that we can be proud of.”

Institute of Arts and Culture

The establishment of an institute of arts and culture for training and accrediting locals in the industry is just one of the plans for fulfilling the mandate of her Ministry. Minister Henry pointed out that, “Definitely I would hope to see an institute of creative arts in its true form… a building that houses the various sections of our art and where our people can be well trained.” 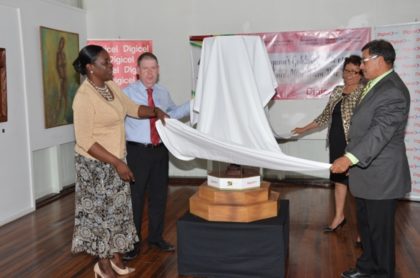 Several calls have been made over the years from artistes for more to be done for the development of Guyana’s cultural industry.  The Minister explained that since assuming office she found that despite the presence of institutions there was no accreditation.  “ I have to say I am a bit disappointed that we have institutions such as Burrowes School (of Art) and they do a great job, but they are not accrediting so we have to work towards ensuring that we have institutions that can provide our people with not only the skills, but the qualifications …”

Ruel Johnson has since been appointed Cultural Advisor to the Minister of Education and is currently spearheading the creation of a National Cultural Policy.

Expressing her enthusiasm and the importance of establishing the institute, the minister indicated that she would want to see the institute of creative arts, as a major undertaking during next year. She also expressed her desire to see government’s investment in areas of culture and art, giving Guyanese similar opportunities as their counterparts in the region.

Turning her attention to sports, Minister Henry said, this is one area where there will be heavy investments to ensure that the opportunities in sports will be able to merge with academic so that “we create and produce much more rounded young people.”  Work is also being undertaken by the minister and her staff to ensure the roll – out of the National Youth Policy and plans for the development of young people.

Efforts are also continuing to bring about changes in several areas of culture youth and sport. Specifically, she identified the department’s flagship programme as the grounds rehabilitation and improvement, which will benefit all the regions. “We are going to do a few in each region so there will be no single region left out in the initial phase….”

Noting the absence of Guyanese athletes on the international circuit, the minister said, she would like to see more involvement, but participating in events of an international nature is primarily an outcome of “where you are in terms of sports in your country or your territory. The fact that we do not have athletes who are prepared and ready enough to qualify in many instances to participate speaks to a void we have here in the country …. so we have to make the type of investment in the infrastructure to ensure that they at least have the facilities where they can be trained in similar environment as to where they would actually go to compete…”

Minister Henry’s desire is to see the government go through the process of ensuring that “we provide our athletes with the resources so that we can be able to have the level of participation that would have our flag flying high.” She however knows that, “This certainly is not something that can be achieved in a year. As we work particularly the next four years we are going to see improvement in the areas of development, so that we can have titled representation internationally and regionally by our athletes.”