-over 4000 residents to benefit

The 30 kilometres all-weather road, dubbed the Sydney Allicock Highway’ starts from Central Lethem and runs through Hiawa, Nappi and Parishara. It will positively impact the lives of over 4000 residents within those and other communities.

The project was funded by the Guyana Geology and Mines Commissioned (GGMC) and was executed in three phases. 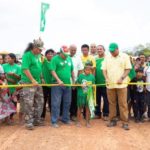 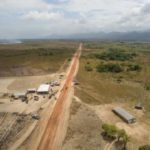 An aerial view of the road. 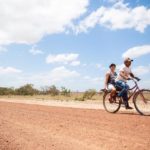 The second phase (30 kilometres) will continue through Fly Hill, Kaicumbay, Quatata and Kwaimatta; and another 30 kilometres to Yupakari straight onto Toka village, North Rupununi.

At the ceremonial opening today, Minister of Indigenous People’s Affairs, Hon. Allicock noted that the road will bring major economic benefits to the people of the region as they can now travel with ease to conduct their business in Lethem.

Farmers will now be able to transport their produce to the market; medical emergencies will be transported quicker and students will also be able to travel hassle-free to school.

“We listened to you, we heard you and we are delivering,” Minister Allicock said.

Also, at the commissioning was Minister of Natural Resources, Hon. Raphael Trotman who recalled that talks on the construction of the road had been ongoing for over 30 years.  However, it was under the Coalition that it was realised and in less than three months phase one was completed.

Minister Trotman recommitted his ministry’s support to community development in the area even as he recalled some of the projects executed over the past years.

Among these was the construction of water reservoirs in Nappi and other villages to assist during the dry season. Several wells were dug through a collaborative effort between the Guyana Water Incorporated and the Brazillian Army.  A number of roads and bridges and roads were also rehabilitated constructed including the Manari bypass road and the Karasabai main access road.

Toshao of Nappi, Guy Fredericks commended the Coalition government for this major development. He also highlighted several other initiatives being undertaken in the area such as potable water distribution systems and internet connections at schools and other public spaces. Nappi also received a $5Million grant to develop their tourism venture and its water reservoir.

Regional Executive Officer of Region 9, Karl Parker noted that the road is in keeping with the region’s committeemen to improving the lives of its residents.