The 2017 National budget is one that will definitely create employment, not only in oil and gas, but other sectors, Minister within the Ministry of Social Protection, Labour Keith Scott has said. 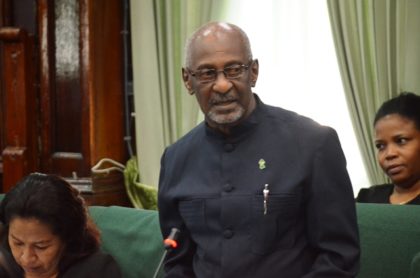 The Minister with responsibility for labour, made this statement on a recent ‘Budget in Focus’ programme which was aired on the National Communications Network (NCN).

Minister Scott noted that for years, Guyanese youths have been plagued with unemployment. He explained that the 2017 budget seeks to create substantial job opportunities for Guyanese. “The oil and gas is one, but we have other areas that we encourage that will offset employment; the growth of the cooperatives is one area that will spur employment in…. I feel positive of that and the training that is ongoing that is also showing results, so jobs will be coming,” Minister Scott explained.

Unlike Suriname, Trinidad and other countries which have been experiencing an economic downturn, Scott said, Guyana’s economy has been growing and more investors will spur job creation. He emphasised that many persons have been seeing positive things about Guyana, “including those persons in the Islands, as well as outside of the islands, so we know that Guyana has a future and the future is now, and the fact is that Guyana has an accounted Government which deals with transparency.”

Additionally, Minister Scott pointed out that the government has put measures in place in the 2017 budget to encourage investors to come to Guyana. The labour Minister said  that, “with this budget we have found that corporate taxes have been reduced, we found that we have given incentives to investors who want to come onboard, for example if they want to bring electrical appliances they will be given these incentives so that we can help to spur the economy.”

The Minister alluded to the National Tourism Policy which will soon come on board as another avenue for employment. “The policy includes a focus on developing market-ready tourism products, enhancing the quality of service, generating increased employment in the sector, and improving tourism’s contribution to economic growth,” Minister Scott said.

Minister Scott, is of the opinion that budget 2017 will go down as one with measures that will further boost the economy and drive development.