A total of 265 metres of brushwood dam would be constructed along the foreshore of Walton Hall, Essequibo Coast, Region Two.  This project costing $11,529,100 involves the construction of two dams measuring 140 metres (m) and 225m for the southern reach exposed to wave energy.

Construction of this structure is expected to begin in August 2016 with two months’ duration. The contractor will begin mobilising resources new week. The defects liability period is also two months. 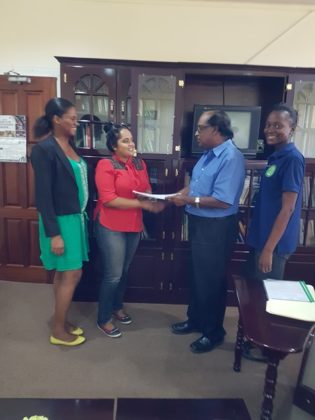 Chief Executive Officer of NAREI, Dr. Oudho Homenauth presents a copy of the contract to a representative of S&K Construction Services. Also in the picture are head of the Mangroves Department Kene Moseley and NAREI’s Engineer Luandra Jack

Meanwhile, the contractor would commence construction of 240m of brushwood dam at Lusignan, East Coast Demerara, Region Four in September 2016. The contract duration is two months and the defects liability period is also two months. This project involves the construction of one dam measuring 60m perpendicular to and 180m parallel to the foreshore for the eastern reach exposed to wave energy. The brushwood dams would be placed one metre from the sea defences and 240m away from the sluice outlet.

The groynes are expected to reduce the amount of wave velocities, allowing sling mud to settle out on the lee side of the structure. Over time, the elevation of the foreshore will increase to an height suitable for mangrove restoration. It is anticipated that the groynes will accelerate the restoration of this area by creating a larger footprint of suitable foreshore elevations over a much shorter time‐frame than what would naturally occur in the absence of the groynes.