A working group comprising Russia and Guyana is evaluating the recreation of new geological guidelines for the Guyana Geology and Mines Commission among other areas of technical support. 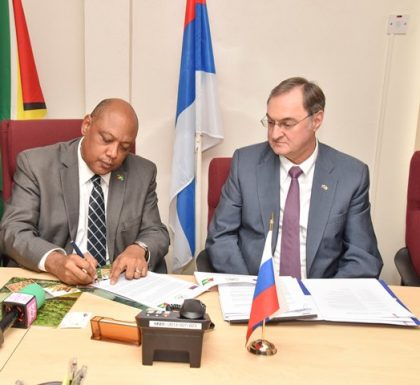 Minister of Natural Resources Raphael Trotman signing the Protocol in the presence of Russian Ambassador to Guyana Nikolay Smirnov.

The second working group today concluded the two-day meetings with the signing of a protocol between the Minister of Natural Resources Raphael Trotman, Russian Ambassador to Guyana Nikolay Smirnov and head of the delegation Sergey Aksenov, the Deputy Head of Russia’s Federal Agency of Subsoil Management.

“As you know, the GGMC in particular, this year has placed an emphasis on mapping the geology of Guyana and so it is for the GGMC to advise the respective agency in the Russian Federation what support it needs to carry out its work,” Minister Trotman explained.

Discussions also focused on building and expanding the academic exchange between the two countries. “Training at universities in Russia, our geologists have always for the last decade been trained in Russia. We just want to renew that,” Minister Trotman explained.

Ambassador Smirnov noted that the working group will engage the University of Guyana on Friday with the aim of fostering academic relations between the two countries. Guyana has benefited from Russian scholarships over the years.

Head of the Russian working delegation and the Deputy Head of Russia’s Federal Agency of Subsoil Management Sergey Aksenov.