The Public Health Sector will benefit from the internship service of 40 medical students who are completing their final year of medical school by way of internship for the next year. These Cuban trained medical students are expected to be placed at regional hospitals across the country. 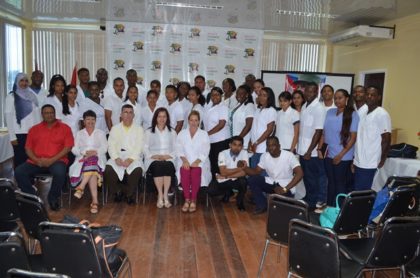 The students were today, oriented at the National Racquet Centre in preparation to begin their internship next week. The batch was informed of the respective regional hospitals that will be accommodating them to complete their internship.

Medical students from Antigua and Barbuda, St. Kitts and Nevis, Grenada and Jamaica will also be doing their one-year internship in Guyana.

During the period of training in service, the medical students will receive a monthly stipend of $ 60,000. After the one-year internship, they will be licenced medical practitioners and recognised as Government Medical Officers (GMOs).

Cuban Trained sixth year medical students being debriefed by Permanent Secretary of the Department of Public Service, Reginald Brotherson during the orientation session.

The Permanent Secretary noted that, “Many distinguished persons, doctors who have done so well had their initial training in Cuba, so no doubt you batch here, sixth year medical students will be following closely in those footsteps, and you all would be making or are expected to make the kind of contribution to develop the health sector in our country.”

The Cuban Medical Brigade currently working in the 10 administrative regions will work along with the students, providing tutoring and guidance during their tenure.

More than 500 Cuban trained doctors have since returned after completing their training and are serving the country, in keeping with government’s effort to improve public health care.