–5000 residents and farmers to benefit

Flooding in Region Five will be a thing of the past following the commissioning of a $415M sluice at D’Edward. Approximately 5000 residents and farmers will benefit from the infrastructural development.

The new four-door sluice replaces the old three-door sluice which was in a dilapidated condition. It also has a 33 percent greater capacity to drain 16,000 acres of land and pump over 6000 gallons of water per second.

CEO of National Drainage and Irrigation Authority, Frederick Flatts said the sluice in conjunction with other sluices and pump station serves an area of approximately 48,000 acres of residential and agricultural land. 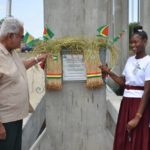 Minister of Agriculture Noel Holder along with Chief Executive Officer of NDIA Frederick Flatts and a student of Rosignol Secondary Commissions the Sluice at D’Edward. 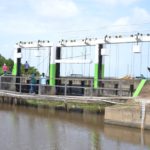 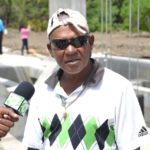 “All of this is being done to improve drainage in this area. We look forward to a time when this area would hardly ever see flooding. That is not going to happen by luck, it is happening because of forward-planning… when we talk about reducing flooding it is not mere talking, it is a real attempt to reduce flooding,” Flatts stated.

Minister of Agriculture Noel Holder said the new sluice was constructed to cater for future developments of the region. It signals the government’s commitment to developing regional agriculture and boosting village economies he noted.

“Region 5, is the largest rice-producing region in Guyana producing 45 percent of paddy production annually.  In 2019, 1,760 farmers cultivated 40,936 hectares producing, over the two cropping seasons, 454,715 tonnes of paddy. From Number #27 Village to De Edward, West Coast Berbice, there are about 500 rice farmers who cultivated approximately 11,500 acres in the last crop that will directly benefit from this investment”

Additionally, the Minister highlighted that in 2019 alone, the Ministry of Agriculture, through the MMA-ADA, has invested $846Million to continue implementing the upgrading and rehabilitating of drainage and irrigation systems and land administration in Region Five.

He assured residents that the government “remains committed to flood risk management for the economic, and social well-being of the Guyanese people, and gives its assurance that it will continue to implement aggressive plans and (civil) works to undertake investments, maintenance and future planning in drainage and irrigation.”

Farmer Ramalingam Rangasammy told DPI he welcomes the new sluice. “This one is better because the old one had three doors and this has four and it is designed differently because with the new one you can clean it from the top, the other one you had to go down and clean it,” he said.

The sluice was designed by SRK Engineering at a cost of $13.7Million and supervised by E&A consultants for $16.7Milion. Courtney Benn Contracting Service Limited, then constructed the sluice for $415Million; totaling $445 Million.