Drawn from 10 communities in the Potaro-Siparuni Region, eleven youths are from Sandhill, three from Kamana, thirteen from Waipa, nine from Kaibarupai, five from Kopinang, eight from Maikwak, two from Kato, eleven from Chiung Mouth, nine from Kurukubaru, and four are from Kanapang.

One of the youths receiving his HEYS grant from Minister within the Ministry of Indigenous Peoples’ Affairs, Valerie Garrido-Lowe.

One of the youths receiving her HEYS grant from Minister within the Ministry of Indigenous Peoples’ Affairs, Valerie Garrido-Lowe.

Minister within the Ministry of Indigenous Peoples’ Affairs, Valerie Garrido-Lowe with some youths from Chiung Mouth Village.

Minister within the Ministry of Indigenous Peoples’ Affairs, Valerie Garrido-Lowe with some youths from Kato Village.

The youngsters benefitted from training under the Hinterland Employment and Youth Service (HEYS) programme where they received a monthly stipend of 30,000 and an additional sum to start up their businesses.

Minister within the Ministry of Indigenous Peoples’ Affairs, Valerie Garrido-Lowe, who travelled to the region over the weekend and distributed the stimulus grants of $50,000 each to the youngsters, commended them for their hard work and persistence.

“For Region 8, I would give them a big star for trying because you have to realise that these youths never knew about doing business. There are normal youths that drop out from school… some mining and they just around, wanting to do something, wanting to learn something but there is nothing much, so this is the first time they are given the chance to try something to see what business they can do.”

The minister referred to one particular group from Kopinang Village, who pooled their resources and constructed a guest house which, she said, was badly needed in the village. She also mentioned another group of young people involved in fish rearing and needs assistance in acquiring fingerlings for the fish pond.

“I think they are doing a wonderful job, and I believe they will be very successful in their business. These youths made very good investments,” she emphasised.

Minister Garrido-Lowe also made a promise to assist in providing additional training in the area of hospitality for the youths. Further, the Ministry of Agriculture has pledged to assist them with the fish raring project.

Everlyn Sapirian, a young Entrepreneur of Kamana Village, involved in chicken rearing, said that he is grateful for the grant. “It will help me a lot.”

Whanita John, from Waipa Village, pointed out that the HEYS programme has benefitted her tremendously.  She will be using the grant to expand her business. “We feel good. We are going to invest it towards the same programme.” 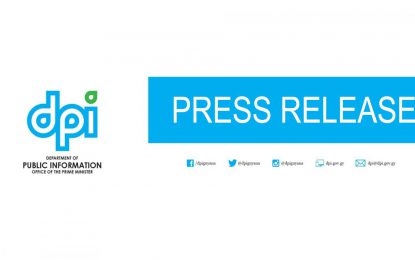 Members of the Diplomatic Corps at the...

Technicians to be trained to test for COVID-19

First Lady, HE Arya Ali determined to serve her...