The number of youths who are accessing different forms of training provided by the Government is increasing. Fifty (50) youths graduated over the weekend after completing a two-week Leadership programme at the Madewini training centre in Yarrowkabra. 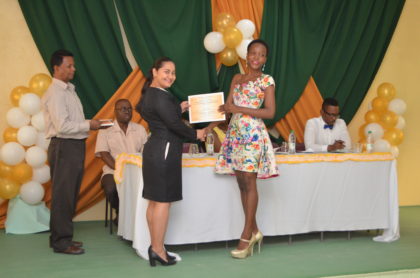 Ms. Adeti DeJesus, of the Office of the Presidential Advisor on Youth Empowerment presents a certificate to Akeila Dey

The programme is aimed at empowering youths with the necessary skills required for leadership. The beneficiaries are expected to return to their respective communities and train other youths.

Delivering the charge at the graduation exercise, Minister within the Ministry of Education, Nicolette Henry told the youths that, “It is upon you the future of this nation depends.”

They were enlightened about the impact they could have on authority now that they have the necessary skills. “With the knowledge behind you, you can influence decision makers to pay more attention to the issues that affect young people. You have the right to demand this for the sustainable development of your respective communities and Guyana as a whole,” Minister Henry urged.

The Minister further stated that, “You are now in a position to ask yourselves what you can do for this beautiful country, instead of asking what Guyana can do for you.”

Minister Henry underscored the importance of the graduates imparting the knowledge they received to youths in their respective communities. “Your attendance to this training programme would be useless if you were to fail to translate what you have learned and put it into action,” the Minister added. 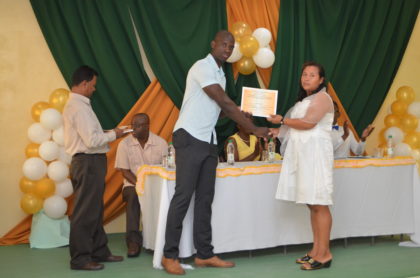 Mr. Ronald Austin of the Office of the Presidential Advisor on Youth Empowerment presents a certificate to Ulita Henry

They were also advised to not be satisfied with mediocrity and to speak out on social and political issues that are affecting development. The Minister pointed out that the path ahead will not be easy, but were urged to put their shoulders to the wheel.

Presidential Advisor on Youth Empowerment, Aubrey Norton who made brief remarks at the event, pointed out that the aim of the programme is to bring out the talent and skills of young people. “We found a lot of potential youth leaders who were not exposed to training as a consequence we decided that we will develop this training programme,” he stated.

Norton explained the content of the training stating that, the youths were exposed to leadership quality and leadership, problem solving, decision making, and effective public speaking among other issues.

Norton noted that the programme was very interactive and this helped develop the self-esteem of many participants.

“We decided it should not be chalk and talk so they were lots of discussions on issues which I have no doubt would have contributed to their development,” he explained.

Each participant was presented with a certificate, and awards were also distributed to those who were chosen from among their peers for the, “Best Exemplified Leadership” and “Most Outstanding Personality”.

Akeila Dey who graduated as the female that best exemplified leadership noted that the programme has benefited her tremendously. She stated, “It was very significant and it equipped me with the necessary skills needed to become an effective leader. I can fairly say I would definitely go back to my community and make the most powerful impact ever.”

Now that the National Youth Policy has been laid many such initiatives are in the pipeline to be executed as part of a larger thrust toward youth development. Approximately 150 youths have thus far graduated from this programme.