Communities in the South Pakaraima District in the Upper Takutu-Upper Essequibo, Region 9 received $3.5Million in grants for various village projects and an All-Terrain Vehicle (ATV) valued at $2.6Million.

The cheques and transportation were presented to the villages by Minister of Indigenous Peoples’ Hon. Sydney Allicock during a community engagement at the Cashew Tree Park on Thursday.

Paipang, Tiger Pond and Karasabai received $500,000 each to embark on fruit farm projects; while Taushida received $1Million towards the repair of their village tractor to continue their agriculture and lumber ventures, and $1Milluion was given to Yurung Paru for the construction of a Community Centre. 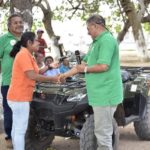 Minister of Indigenous Peoples’ Affairs, Hon. Sydney Allicock handing over the keys to the ATV to the Community Development Officer. 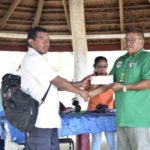 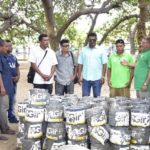 Minister of Indigenous Peoples’ Affairs, Hon. Sydney Allicock handing over materials for fencing of farm lands to the Toshaos.

The ATV was given to the newly appointed Community Development Officer (CDO) serving those mountainous villages within the district.  Additionally, Paipang received a generator set and the villages, material for fencing farmlands.

DPI spoke with the village leaders who noted that the grants were timely as it allows the Village Councils an early start to their 2020 workplan.

Kendell Francis, Toshao of Paipang explained that the fruit farm will further boost the development of his village and adds to the other ongoing projects in the community. These include a swine and sheep rearing project, a cassava harvesting project, a fuel depot and village snackette, from which the 200residents benefit.

Charles Man-song-hing, Toshao of Tiger Pond explained that he will be engaging his people on how they will be fully utilising the funds to ensure each of the over 100 residents’ benefit.

In his remarks, Minister Sydney Allicock encouraged the people to fully utilize the support the government has been making available to improve their livelihoods.

“These are not handouts; these are requests that the people have made and we are delivering…Use them to enhance your lives. It is not for a specific person; it is to be used for everyone. Work together, unity is the best way to build your community,” Minister Allicock stressed.

He also advised the residents to be more involved in agriculture not only as a means to sustain their families and communities but to become the breadbasket of the entire Region and by extension the country.

Minister Allicock also used the opportunity to highlight some of the key achievements under the Coalition Government over the last four years, such as the Hinterland Employment and Youth Service (HEYS) programme which has trained 4000 youths in various skill areas and has led to the development of over 2000 businesses.

The minister also mentioned the $130Million Hinterland Green Enterprise Centre at Annai, which will train Indigenous youths in areas including heavy-duty machinery and motor mechanics among other skilled areas that are needed in the hinterland.  This technical institution will be replicated in Regions 1, 7 and 8.